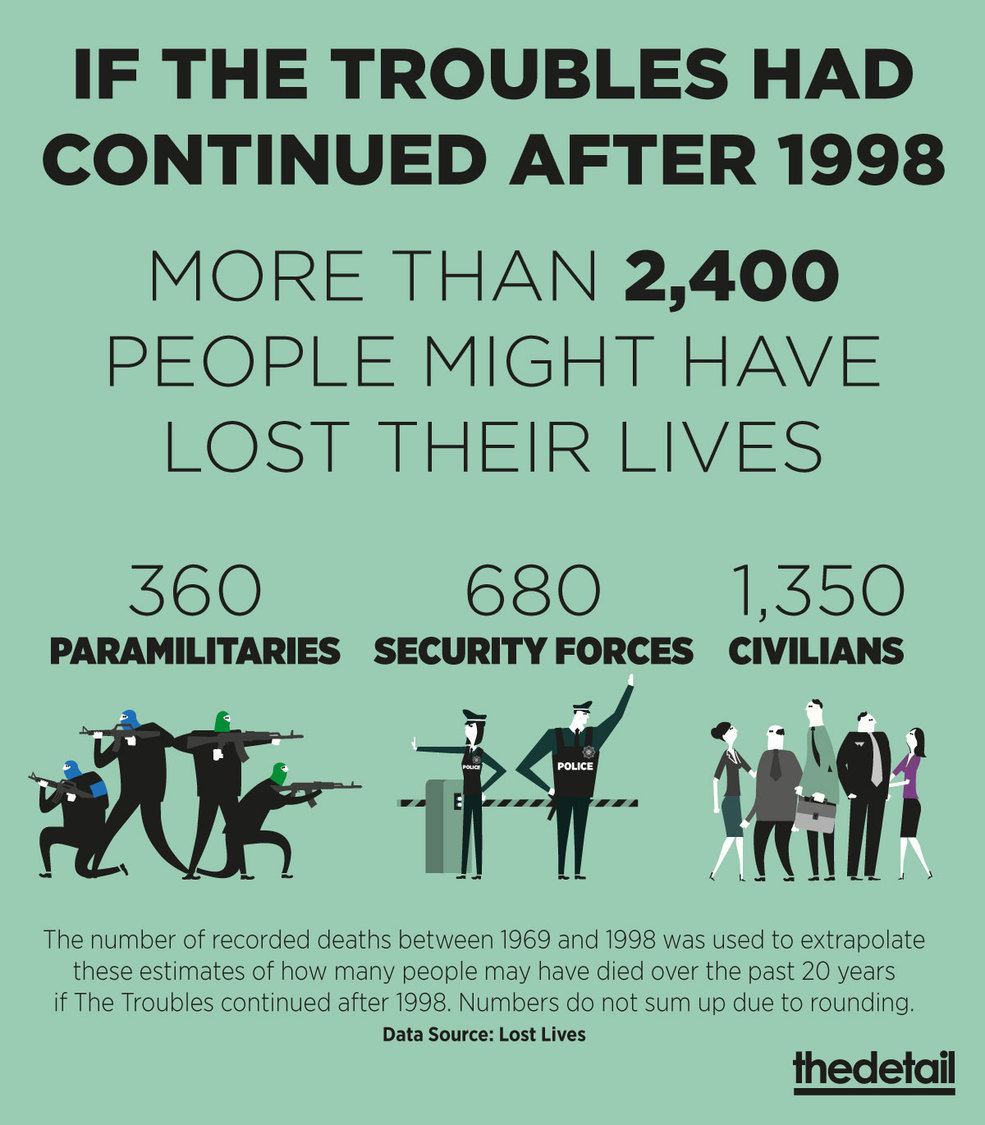 Infographic by Chris Scott, with research by Rory Winters and Maresa Fagan.

ARE you one of the people alive today because of the Good Friday Agreement?

More were to die in the years after the peace deal - representing a horrendous loss to their loved ones - but the scale of the violence dramatically declined.

If the agreement had not been reached on that pivotal day 20 years ago, the estimates shown in the graphic above suggest a further 2,400 people or more might have died by now.

For all its imperfections, the Good Friday Agreement was a life saving turning point.

Too late for some, too little for others, but a game changer that re-framed historic animosities.

Twenty years to the day since the deal was struck, the negotiators gathered again at Queen's University Belfast.

Former enemies mingled in the crowd, in scenes that echoed the unexpected compromise of that day.

And on the stage: Clinton, Blair, Ahern, Mitchell, Trimble, Mallon, Adams, McWilliams, Alderdice. And there were more. The names who made history happen.

Others were remembered among the audience, where people spoke of the perseverance of Hume, the energy of Mo Mowlam, and the unexpected partnership of Paisley and McGuinness.

Senator George Mitchell stepped to the podium and hailed the peacemakers of 1998: "These were ordinary men and women, but after 700 days of failure, they joined in one day of success and they changed the course of history."

He asked that any signatories to the deal who were sitting among the large audience in the university's Whitla Hall to stand up.

Among those who rose to their feet where the first Stormont political partners, Seamus Mallon and David Trimble. Loud applause rang around the great hall, encircling the two men where they stood among the seated crowd.

Moments later Senator Mitchell closed his speech by thanking the people of Ireland north and south for giving him the opportunity to discover his family roots on the island and to fill an "inner void" he didn't know existed. As he finished, there was a standing ovation.

The event soon got down to business. As well as looking back, it looked forward.

Rev Harold Good spoke of the need to encourage further transformation in communities. Tackling poverty and ending educational under-achievement were crucial, he said.

David Trimble called on parties to avoid politics being "clouded by references to Brexit", insisting the issue posed no threat and would soon be resolved.

A condemnation of Brexit by Tony Blair would later spark resounding applause.

Seamus Mallon recalled a neighbour, murdered for being a security force member, his blood spilling on the contested soil.

Gerry Adams recalled 20 years of covert dialogue before that Good Friday in 1998, adding: "By any measurement this island is in a better place."

The former Sinn Féin leader pointed to DUP figurehead Arlene Foster in the audience saying that they had been close to a deal to restore Stormont.

Her predecessor Peter Robinson, who was also among the speakers, said it was unfair to point her out when she couldn't respond, but noted Michelle O'Neill was also in the crowd and said: "I think they will eventually do a deal."

Then it was the turn of the old triumvirate: Tony Blair, Bertie Ahern and Bill Clinton.

For Blair the story began with childhood summers in Donegal, recalling the outbreak of the Troubles and the long road to peace, all the way to the deal: "When we reached that agreement, that was the beginning."

And of the current deadlock? The absence of Stormont? He took the long view from the Troubles to today: "The comparison is where we are and where we were."

Many had recalled how Bertie Ahern returned from his mother's funeral to help deliver the deal. For himself, Mr Ahern cited memories of "honourable compromises" and stressed: "There's nothing more important than stopping people being killed."

George Mitchell remembered a late night in the talks venue of Castle Buildings. An aide said there was a call for him. Mitchell recounted that it was the president: "He said, 'I can't sleep I want to stay involved'."

All these years later Clinton still remained involved. He said the agreement had saved lives and inspired other divided societies: "It was a work of surpassing genius."

The next generation, he said, should focus on shared prosperity, honest debate, and building confidence in politics.

President Clinton, the man of words, summed-up his advice in simple terms: "Keep the cranes up. Keep the voices free. Keep the votes fair."