Results of a future border poll on a knife edge

A LucidTalk poll, commissioned by The Detail, which looked at how Brexit has impacted people's views on the constitutional future of NI, reveals that if there were a border poll, 46.8% in NI would vote to remain part of the UK and 45.4% would vote for a united Ireland. Additionally, 7.8% said they're unsure how they would vote in a border poll.

The Detail also commissioned LucidTalk to run this poll in the Republic of Ireland (ROI). In ROI, 73.1% of respondents would vote for NI to be part of a united Ireland, 10.2% to remain in the UK and 16.7% don't know.

In both the NI and ROI polls, a majority of participants said they supported a referendum on Irish unity taking place within the next 10 years.

Commenting on the results of the poll for The Detail, Professor Colin Harvey of Queen's University Belfast stated: "It increasingly looks like support for the current constitutional arrangements is on a knife-edge. That is simply remarkable. It shakes the legitimacy of the foundations of the existing constitutional order."

The all-island opinion poll assessing the impact of Brexit on the appetite for constitutional change for NI is part of The Detail's Brexit project, which is produced with the support of the Google Digital News Initiative Fund.

The poll was conducted in conjunction with LucidTalk polling company and took place over four days from January 31 to February 3, 2020.

Respondents in NI and ROI were asked to answer a number of questions in our online poll, including their opinion on the current Brexit Withdrawal Agreement, whether or not they believe Brexit has intensified the debate about NI's constitutional future and if they think a border poll is more likely because of Brexit.

They were also asked what their preferred timing would be for referendums north and south of the border, and how they would vote in a border poll. 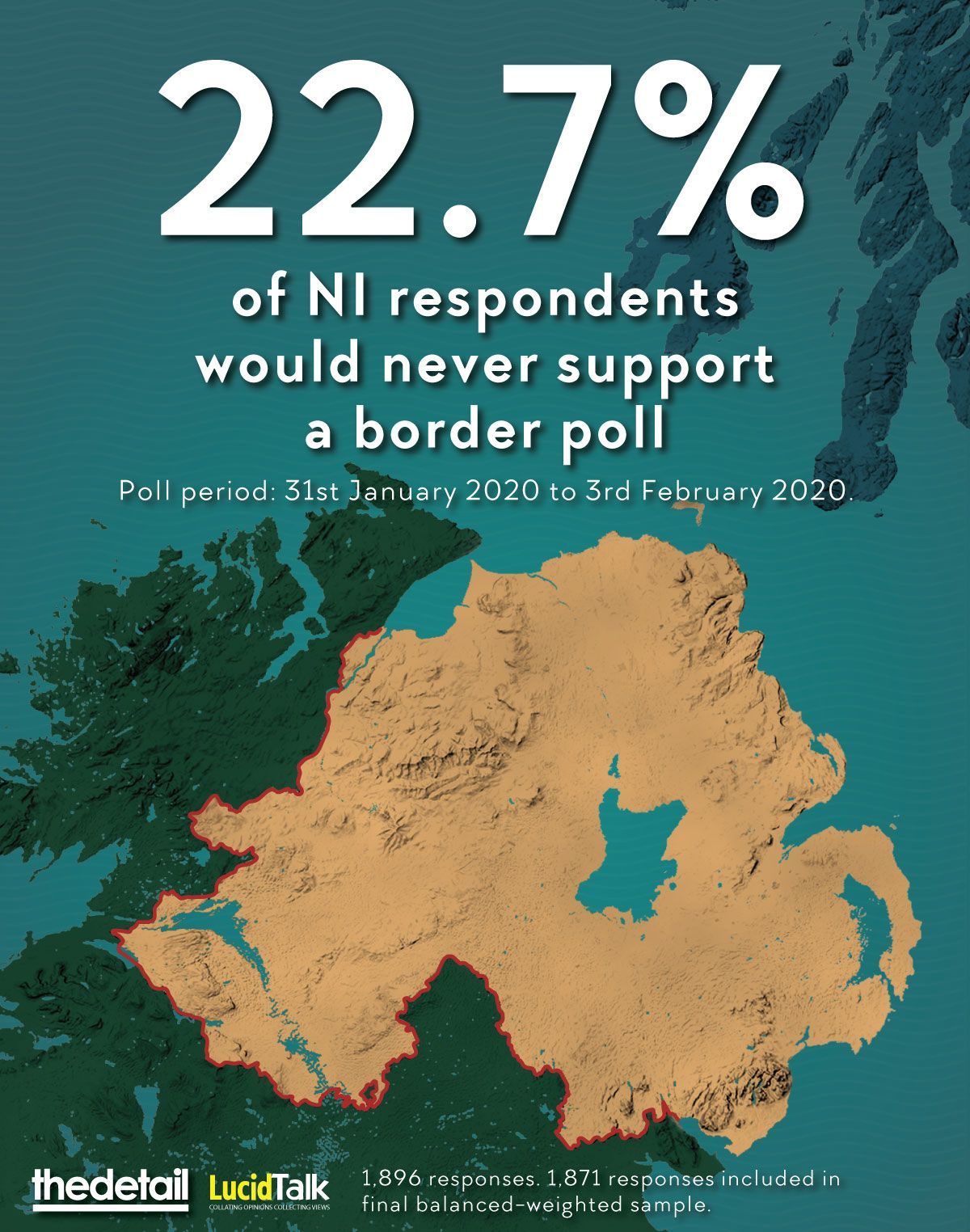 According to The Detail poll results, the number of people opposed to the current Brexit arrangements has increased since the 2016 referendum, when 55.8% of NI voted to remain part of the European Union and 44.2% voted to leave.

Our polling period began on Brexit day, January 31, 2020 and when questioned 68.7% of respondents in NI said they were not satisfied with the current Brexit Withdrawal Agreement, while 16.2% stated they were happy and 15.1% said they didn't know. Of those that voted for Brexit in 2016, 64% are now unhappy with the deal as it stands.

A bigger majority of 74.6% of respondents in ROI believe that Brexit makes a border poll more likely. Of the remainder, 14.2% stated it did not and 11.2% didn't know. 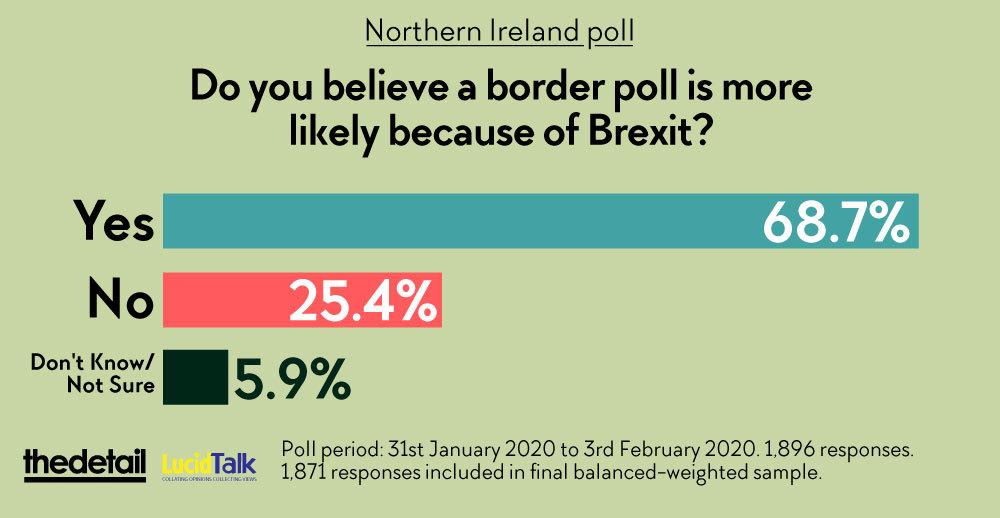 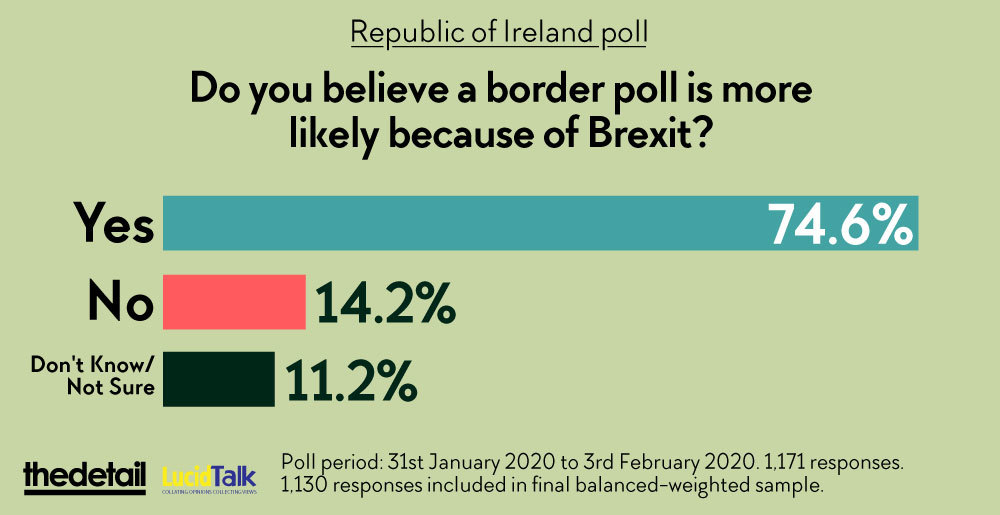 In a special column for The Detail, author and financial journalist, Paul Gosling argues that a 10 year plan is required in order to make a united Ireland economically viable.

He comments: "There is probably unanimity that any border poll must avoid the mistakes of the Brexit referendum. Everyone needs to have clarity over the proposal, in advance of the referendum taking place. Just what would we be voting on?"

When viewed through the prism of Brexit, the number of respondents in NI who would support a united Ireland if it meant a return to Europe is greater than those who would not. Asked would you support Irish unity as a pathway back to membership of the EU for NI, 47.9% of NI respondents answered yes, 44.8% said no and 7.3% don't know/not sure. In ROI 73.4% answered yes, 13.8% no and 12.8% don't know/not sure. 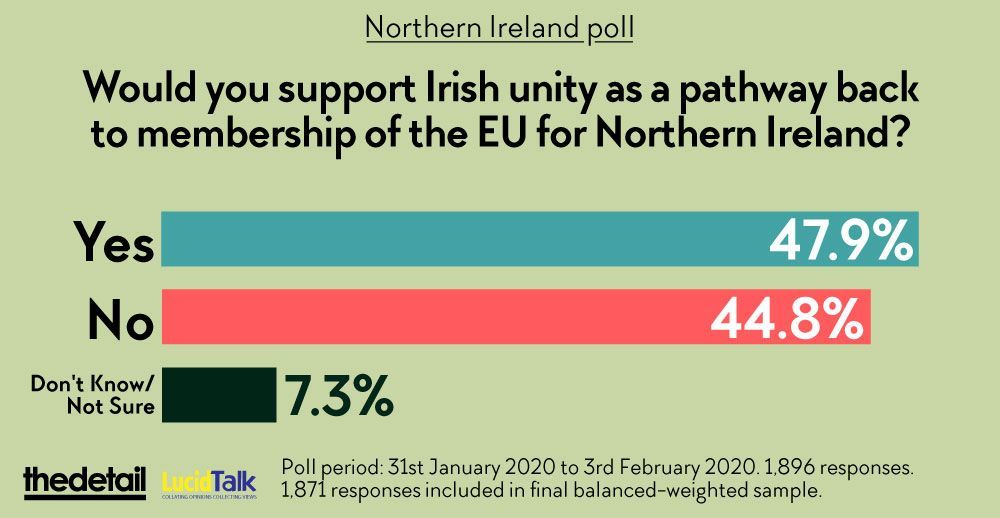 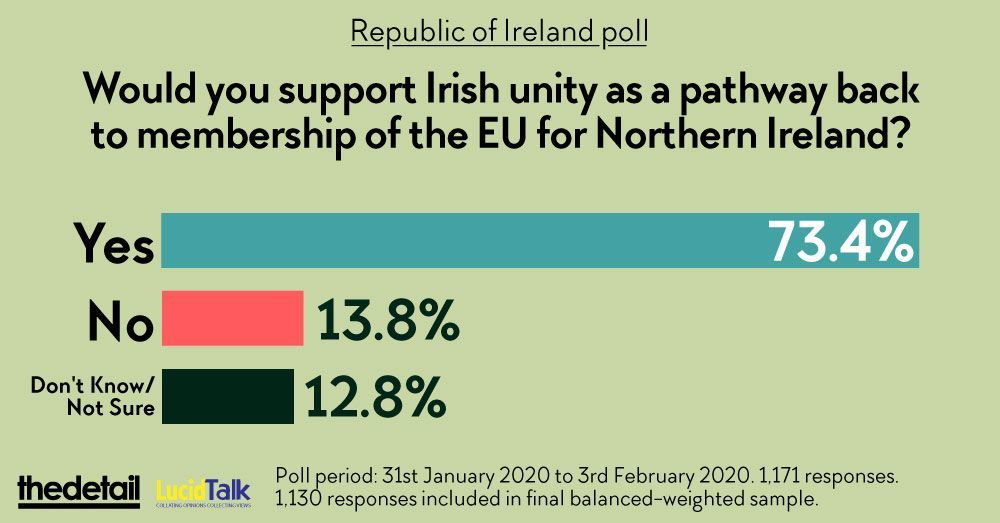 The majority of people on the island of Ireland would support a border poll taking place within the next 10 years and even sooner, within the next five years, is the most popular time frame indicated by our respondents on both sides of the border. 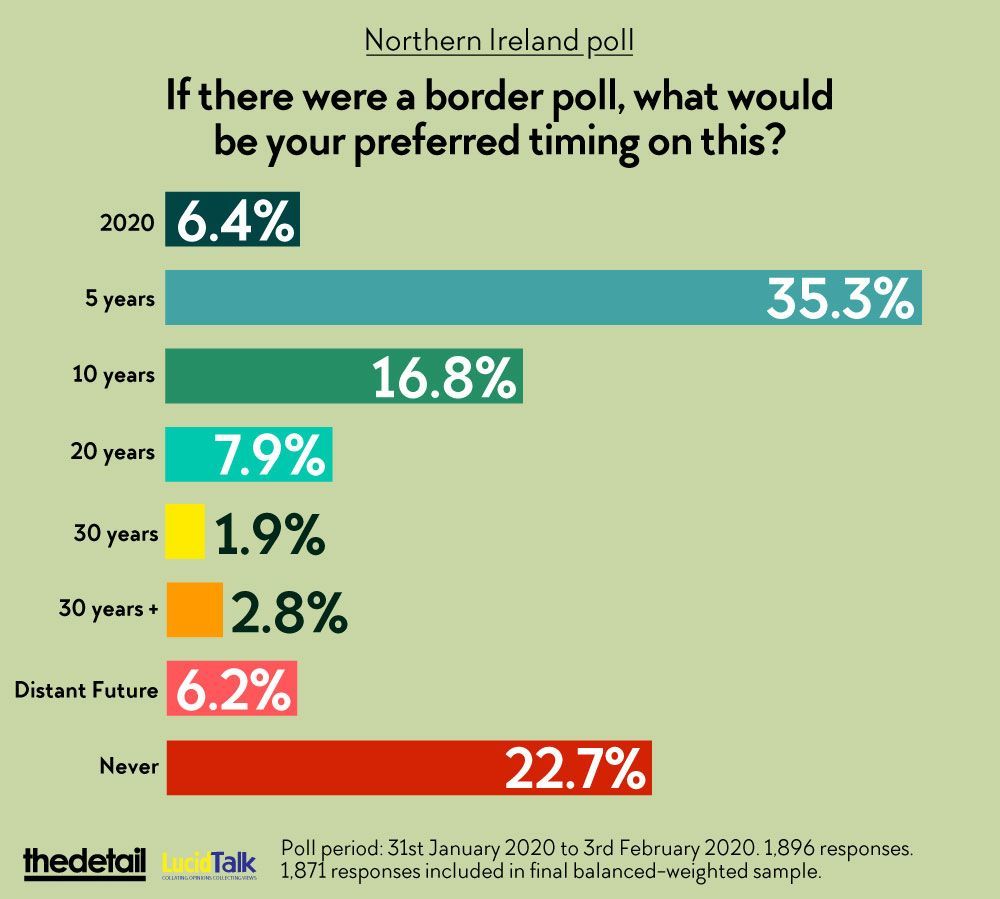 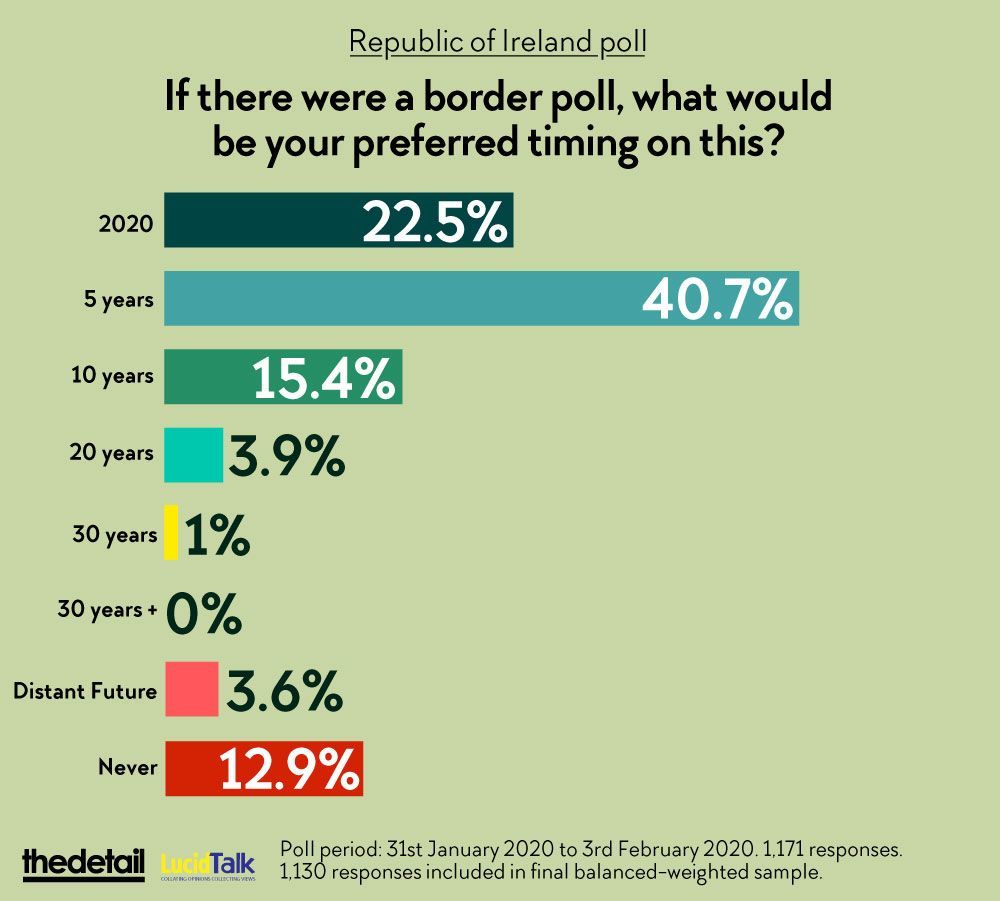 Analysing these results Professor Harvey said: "This island is heading towards these referendums. Whether that is within five or 10 years is a matter for political debate. There is no excuse for avoiding the work involved in managing the potential for constitutional change that will arise."

Questioned on how they would vote in a referendum on the constitutional position of NI, 46.8% of respondents in NI would vote to remain part of the UK, 45.4% would vote to be part of a united Ireland and 7.8% don't know.

When that result is broken down by age, the figure for those who would vote to be part of a united Ireland increases to 50% in the 18 to 44 age group.

The mechanism for triggering a border poll is laid out in the Good Friday Agreement. As it currently stands a border poll can be triggered by the NI Secretary of State "if at any time it appears likely to him that a majority of those voting would express a wish that NI should cease to be part of the UK and form part of a united Ireland".

When questioned, 65.6% of respondents in NI and 76.4% in ROI stated that they believed there should be additional clarity on the criteria for triggering a border poll.

Alan Whysall, an honorary senior research associate at University College London’s Constitution Unit, told The Detail he believes the current confusion about the details of a border poll stems in part from the lack of specification in the Good Friday Agreement.

He added: “There wasn’t discussion about exactly how a border poll would be done at the time because it appeared to be at least a generation away.”

Today in The Detail, Rohan Naik closely examines the criteria for triggering a border poll and reports on the criticism and confusion that surrounds the current mechanism.

Governance arrangement in a united Ireland

The results of our poll also indicate that more people on both sides of the border would favour a federal arrangement for a united Ireland than a centralised government. If a border poll was to lead to a united Ireland, 37.6% of respondents in NI would want a power base in both Dublin and Belfast, while that figure increases to 40.7% of those polled in ROI.

In NI 17.8% would be in favour of a centralised government in Dublin and 33.2% in ROI, while 14.7% of NI respondents and 12.7% in ROI would favour a different governance arrangement.

Of the NI respondents, 26.4% declared they do not wish to consider a united Ireland under any circumstances. This figure is considerably lower, 4.6%, among those polled in ROI. The figures for those that don't know are 3.5% and 8.8% for NI and ROI respectively.

Commenting on these results for The Detail, Sophie Long said: "There are significant numbers in NI who feel political allegiance to the UK or Ireland. What about those who don’t? Where are their choices on the ballot paper?"

In a column written for The Detail, Ms Long makes the case for a creative constitutional menu to be available to voters, rather than a binary choice in a referendum.

The Detail poll results will add to the debate about if and when a border poll should be called, an argument that has intensified as a result of Brexit and Sinn Féin's recent electoral success in ROI. In light of these two recent events a border poll is now very much on the political agenda.

Discussions on this issue are taking place all over Ireland, in our universities, civic forums, community centres, pubs and sports clubs. Over the course of this week The Detail will add to this conversation by publishing a variety of further commentary and analysis of these opinion poll results and what they mean for the future of NI.

Professor Jim Dornan professes his belief that "logic dictates that the health services of the whole island of Ireland should be provided and managed as one entity, whether or not we sign up to a new union of Ireland" and he outlines his vision for what a unified health service should look like.

Dr. Paul Nolan scrutinises the results of the poll and reveals that the majority of those who don't align themselves as either nationalist or unionist are choosing a united Ireland as their preferred option.

Rory Winters reports on the outcome of the last border poll that took place in NI, in 1973, the same year that the UK joined the European Economic Community, as the EU was then called.

In an in-depth interview with The Detail, former Taoiseach Bertie Ahern asserts his belief that "a new Ireland" will be in place before the 30th anniversary of the Good Friday Agreement and stresses the importance of planning for that new Ireland immediately. a