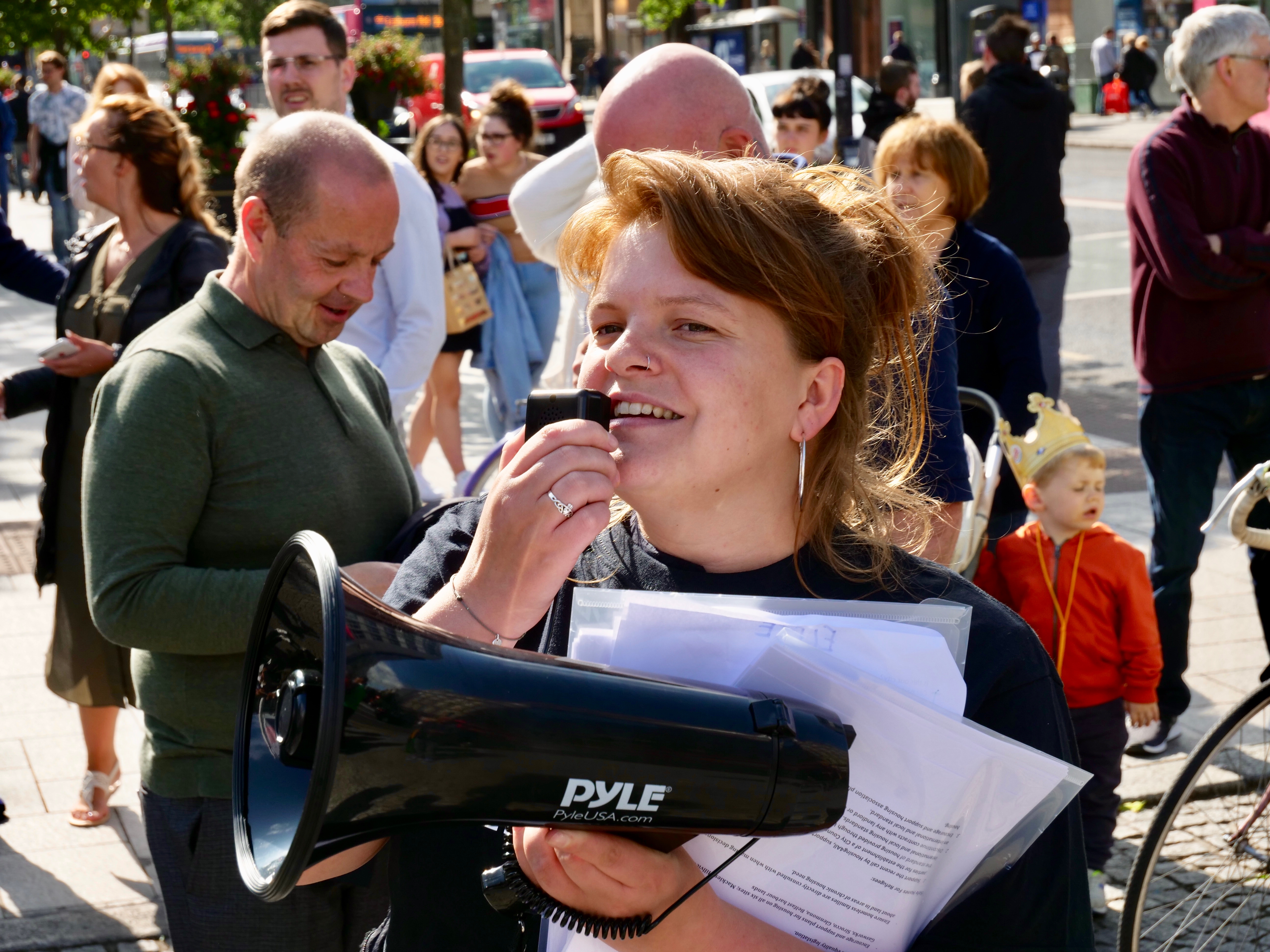 THE Detail and a leading human rights organisation are joining forces to work on a major housing project.

Investigative journalist Barry McCaffrey and Elfie Seymour, an activist from the Participation and Practice of Rights (PPR), have both been awarded a prestigious Bertha Fellowship by the Bertha Foundation.

For the next year Barry and Elfie will be exploring how the nexus between property, profit and politics contributes to land and housing injustice in Northern Ireland.

Barry said: “It is a great honour to have been chosen to take part in the Bertha Fellowship to work alongside Elfie Seymour and the people at PPR.

“This project offers a unique opportunity to work with a highly respected community activist to best investigate the ongoing serious issue of inequality in housing in Northern Ireland.

“This is an issue of major public interest which has not previously been explored by the mainstream media in any serious manner.

“I believe that this project can provide innovative and exciting opportunities to explore new work practices for both fields of investigative journalism and community activism, which will ultimately shape how we understand, report on and challenge all issues of inequality in the future. “

She said: “The Bertha Challenge is a brilliant opportunity to shine a light on who benefits from the housing crisis. More than 15,000 children are homeless and the government is paying millions every year into private hands who benefit from this crisis. We have plenty of land and money in this city but political interference and developer led planning processes are holding back social housing development.

“I am very grateful to be working with Barry, a fearless journalist who goes where the evidence leads and protects his sources. I am also very grateful to the Bertha Foundation for giving me the opportunity to amplify the local situation on an international stage and learn from impressive global activists.”

Bertha Foundation supports activists, storytellers and lawyers who are working to bring about social and economic justice and human rights.

The organisation invited applicants to pitch projects that explore and expose one of today’s most pressing social justice concerns: equitable access to land and housing.

They received 130 applications from 47 countries, which were whittled down to seven journalists and seven activists who were named as Bertha Fellows.

Bertha Foundation said: “The quantity and quality of these applications is a testament to the impactful and fearless work being done around the world to better understand and respond to the forces that perpetuate land and housing injustice.”

The Bertha Challenge provides an opportunity for activists and investigative journalists from across the globe to spend a year deep diving into one pressing social justice issue.

Barry and Elfie and the other successful Bertha Fellows will work independently and together to investigate the causes of land injustice and solutions in relation to the right to land and housing.

For 20 years Barry has reported widely for national and international media outlets. Throughout his career he has worked with a wide range of human rights organisations.

He travelled to South Africa in 2005 to contrast the peace process’ initiatives in the north of Ireland and the post-apartheid era.

In 2013, Barry visited Germany to investigate how the country dealt with the truth recovery process of allowing ordinary citizens access to files which the former Stasi secret police held on them for decades.

That same year, Barry was awarded the Northern Ireland Attorney General’s Justice Media Award for an investigation into the use of solitary confinement against young people in Northern Ireland’s prisons. He is a previous CIPR Digital Journalist of the Year winner.

Most recently Barry worked on the award-winning documentary No Stone Unturned, which exposed police collusion with loyalist paramilitaries in the murder of six men at a pub in Loughinisland, Co Down in June 1994.

Following the release of that documentary in autumn 2017 the offices of Below the Radar and The Detail, as well as the journalists’ homes, were raided in August 2018 by the PSNI and Durham Constabulary. Barry and Trevor Birney, who founded The Detail and is an award-winning producer/director, were arrested.

However, after a successful judicial review taken against the authorities by Barry and Trevor, the High Court ruled last month that warrants obtained by police to carry out the raids on their homes and offices were to be quashed.

Senior judges including the Lord Chief Justice Sir Declan Morgan held that authorisations for the searches which led to Barry and Trevor’s arrests had been inappropriate.

Since then the seized materials have been returned and the police investigation into Barry and Trevor has been dropped.

Elfie has worked locally and internationally organising campaigns in support of marginalised communities.

She previously lived and studied in Greece where she supported Afghani Asylum Seeking families living in a central park in Athens with self-organised groups in the absence of state resources.

While studying at Queen’s University Belfast, Elfie campaigned with Fossil Free QUB to secure the university’s divestment from the fossil fuel industry following the occupation of the university’s finance building. Elfie also chaired QUB Students Together with Refugees who secured scholarships for asylum seekers living in Belfast.

For the last five years Elfie has worked locally to support refugees and asylum seekers across a range of projects. This has included providing solidarity and support to people detained in the Larne House immigration detention centre and with Home Plus in Belfast providing support to destitute refugees and asylum seekers. Elfie currently sits on the committee of SAWA (which means together in Arabic), a refugee led women’s space researching the impacts of Home Office policy, where women empower each other by sharing skills and talents despite restrictions on their right to work.

Since 2017 Elfie has been an organiser with Participation and Practice of Rights (PPR).

In 2018 she supported New Lodge residents to hold a public hearing into tower block safety with input from Grenfell survivors and experts. The Housing Executive has since begun large scale fire safety and repair works and started consultation on plans to demolish all tower blocks in Northern Ireland and replace them with more suitable homes.

Over the last year Elfie has been supporting the youth led #BuildHomesNow campaign in Belfast - documenting the extent of political and developer influence and religious inequality in housing provision and the true extent of child homelessness. She works daily to support homeless families, including Syrian families resettled to Belfast, to identify the available resources and decision-making structures to secure housing on large vacant sites.

The other successful activists who have been awarded a Bertha Fellowship are Charice Starr (US) who works with the Highlander Center in Tennessee; Jared Rossouw (South Africa) who was co-director at Ndifuna Ukwazi; Leilani Farha (Canada) who is the UN Special Rapporteur on the Right to Adequate Housing and is the executive director of Canada Without Poverty; Dr Monica Magoke-Mhoja (Tanzania) who is the country program director of Landesa Tanzania; Yasar Adnan Adanali (Turkey) who is one of the co-founders and the director of the Center for Spatial Justice; Zsuzsanna Posfai (Hungary) who will be working with Periferia Policy and Research Center.

The other investigative journalists who have been made a Bertha Fellow are: Glenda Girón (El Salvador) who works with La Prensa Gráfica; Maeve McClenaghan (UK) from Bureau of Investigative Journalism; Nnameka Ikegweonu (Nigeria) from The Smallholders Foundation; Omar Radi (Morocco) who will be working with Forum des Alternatives Maroc; Protus Onyango (Kenya) from Standard Media Group; Rudra Pangeni (Nepal) who will be working with The Centre for Investigative Journalism, Nepal; Sotiris Sideris (Greece) from AthensLive.