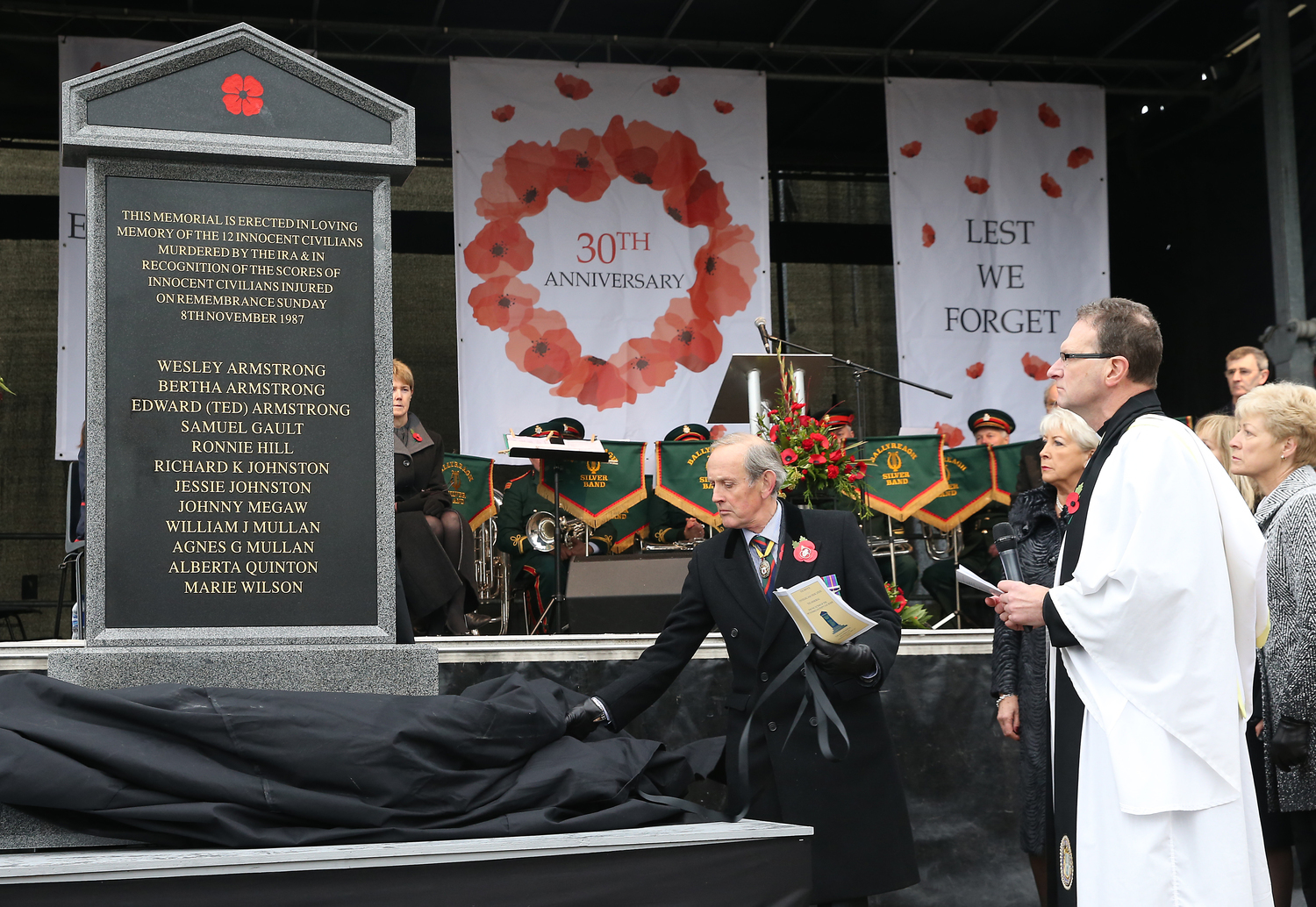 A memorial was unveiled, but has yet to be put in place, to mark the 30th anniversary of the Enniskillen bombing

IF it’s true that those who cannot remember the past are doomed to repeat it, then remembrance in all its forms is a vital focal point of reflection for society.

But remembrance is never that simple, and even the further passing of time results in something of a fugue over what really happened in the past; and our divisions over national identity and disputed narratives mean a further layer of disagreement over the nature of memorials.

It’s not just Northern Ireland, of course, as we’ve seen this year with the removal of statues of United States Confederate General Robert E Lee resulting in death in Charlottesville; and in Britain student bodies have demanded the removal of memorials to the imperialist Cecil Rhodes, the founder of the racist apartheid regime.

American film maker Amir Bar-lev has used the term “memorialisation” and his work provokes some interesting questions by delving into the complication of the purpose and effect of erecting memorials. In particular, his documentary “Happy Valley” studies events at Pennsylvania State University where it emerged that a football coach was guilty of 40 counts of sex abuse against students.

While the head coach Joe Paterno wasn’t implicated, there was palpable anger when allegations emerged that he hadn’t done enough to raise the issue; JoePa, as he was fondly known, was a revered figure in the community and his hero, almost sainted, status had resulted in a statue to him being built. This was a focus of pride for the local community.

Now, though, the scandal and backlash meant the statue was removed.

Nobody would suggest that there was any parallel in Northern Ireland with this case, but as with Robert E Lee, Rhodes and Paterno, changing times, perceptions and purpose make an interesting study.

As do the reasons for the JoePa removal in particular when it became a focus for anger, and claims it was a “source of division and an obstacle to healing” and a “recurring wound.”

'MARKING A TIME IN HISTORY'

Ireland, north and south, is full of memorials and versions of our past. In fact, in this post-conflict era we are seeing more and more memorialisation. Only those who erect them will truly know their objective, whether to honour and remember a loved one or important, revered figure, or a defiant gesture to the other side.

Are we remembering the individual victim, or making sure the brutality and injustice carried out by others is not forgotten, thus making a political point?

Is the effect, therefore, that a memorial becomes a focus for healing or a focus for division?

In that context, a memorial was unveiled in Enniskillen this week which has proved controversial with a town known for its reconciliatory relationships suffering the indignity of the memorial being put into storage hours after it was unveiled.

Money was raised for a structure to mark the 30th anniversary of the Remembrance Sunday bomb in which 12 townspeople lost their lives. But there were private concerns about the nature of the memorial; some felt that its proposed siting was too prominent and it would be subject to vandalism, while there was even some concern about references to the term “murdered”.

But the main issue was that the owners of the land where the structure was to be placed, the Catholic Church, hadn’t been consulted and they want to fully consider the proposal.

So, while this wasn’t resolved in time, the memorial was unveiled at a public event, and then removed in the evening.

Perhaps there shouldn’t have been a controversy which ended up with some bereaved relatives being hurt. There is no suggestion anywhere, not even among republicans, that there should not be a memorial.

To be fair to Enniskillen, which is in keeping with the town’s dignity, the victims and bereaved got their deserved occasion. But the fact that there could be even a slight dispute over such a memorial to an atrocity so universally condemned indicates how sensitivities are finely balanced. Particularly, when a generation has grown up without first-hand knowledge of how awful those times were.

In microcosm, the local difficulty in Enniskillen reflects some of the memorialisation issues; how to mark a time in history which satisfies the varied views of different victims’ families, while at the same time avoiding damage to wider community relations and not entering a controversial political row over past narratives.

And decisions over which past events are remembered can prove subjective.

A few yards from the Enniskillen War Memorial, in 1973 a young RUC man David Purvis died in a hail of bullets from two Thompson sub machine guns fired from a passing car. Not only is there no memorial to him, but few people in the town even remember the incident or who he was.

In other parts of Fermanagh, there is a noticeable rise in the number of republican memorials. In addition to memorials to the 1950s IRA campaign, including Seán South and Fergal O’Hanlon at Altawark near Brookeborough, there are memorials to hunger strikers and fallen volunteers in rural parts of the county which are in nationalist areas.

It can be when both sides memorialise their own icons that the corrosive nature of our divisions rises to the surface. But in Fermanagh, republican structures have attracted limited controversy. 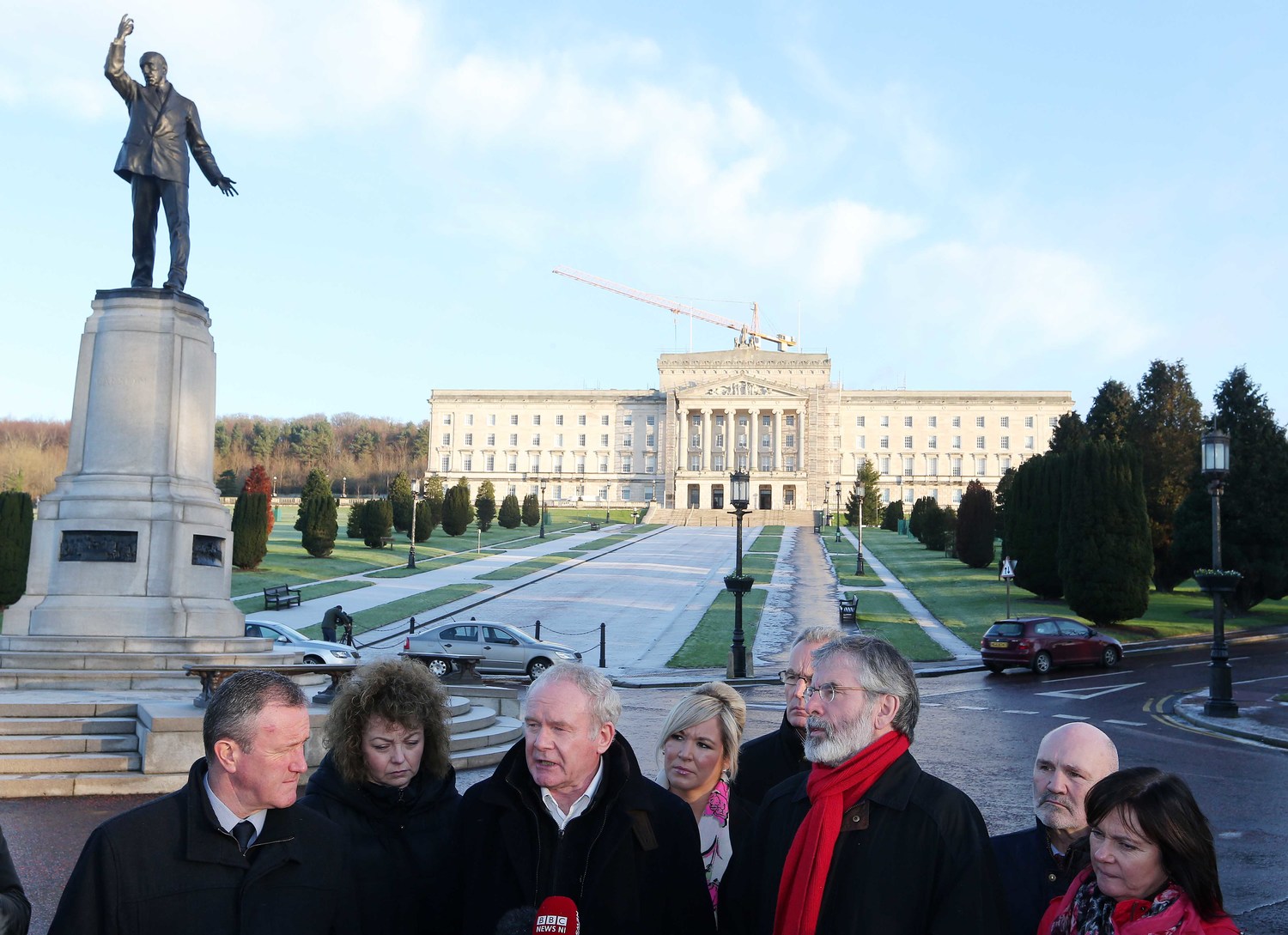 Sinn Féin representatives, including the late Martin McGuinness, holding a press conference next to Carson's statue in December 2014.

When Stormont was up and running, Irish republicans went to work past statues of Carson and Craigavon; though interestingly, republicans recently didn’t suggest tearing them down but putting their own icons up as well.

Whether this would prove toxic would perhaps depend on the nature of such memorials; evidence the fury earlier this year when Sinn Féin northern leader Michelle O’Neill spoke at the launch of a memorial for the IRA men killed by the SAS at Loughgall.

In Belfast city hall they seem to have opted for figures that are less divisive, and it would be interesting to see if republicans asked for a statue of, for example, a Protestant United Irishman of 1798, or what if they wanted a statue of former deputy First Minister Martin McGuinness?

Memorialisation, and indeed disputes over flags and emblems are likely to become more, not less, common as differing cultures and narratives compete for space.

Memorials on both sides are a symptom, not a cause of division, but the fact is they are very prevalent and their purpose may not simply be to only quietly remember people who have passed but to galvanise a narrative.

This week-end, in cities, towns and villages throughout the United Kingdom, dignified Remembrance Sunday ceremonies will take place to honour the dead of war, with the sacrifice of “for your tomorrow, we gave our today”.

It seems right and proper to recall those who fell, society should be reminded of the horrors of war.

But even the dignity of remembrance is shattered by some in Britain who use November as a weapon to force their warring nationalism on others, and for example suggest that those who don’t wear a poppy are somehow less patriotic. And the abuse of footballer James McClean is somewhat unedifying for a nation which claims that they are remembering men and women who died for freedom.

In Northern Ireland, the revulsion over the nature of the attack on Enniskillen is perhaps an acknowledgement that the unionist community should be allowed to remember the dead of world conflicts in dignity.

The reasons and purpose of memorialisation go deep into the psyche of division.

Remembering the past and learning from its mistakes isn’t as simple as it sounds.

Receive The Detail story alerts by email
Who can solve the deep problems in the peace process?
Chief Scientific Advisor in court challenge over GMC hyponatraemia investigation