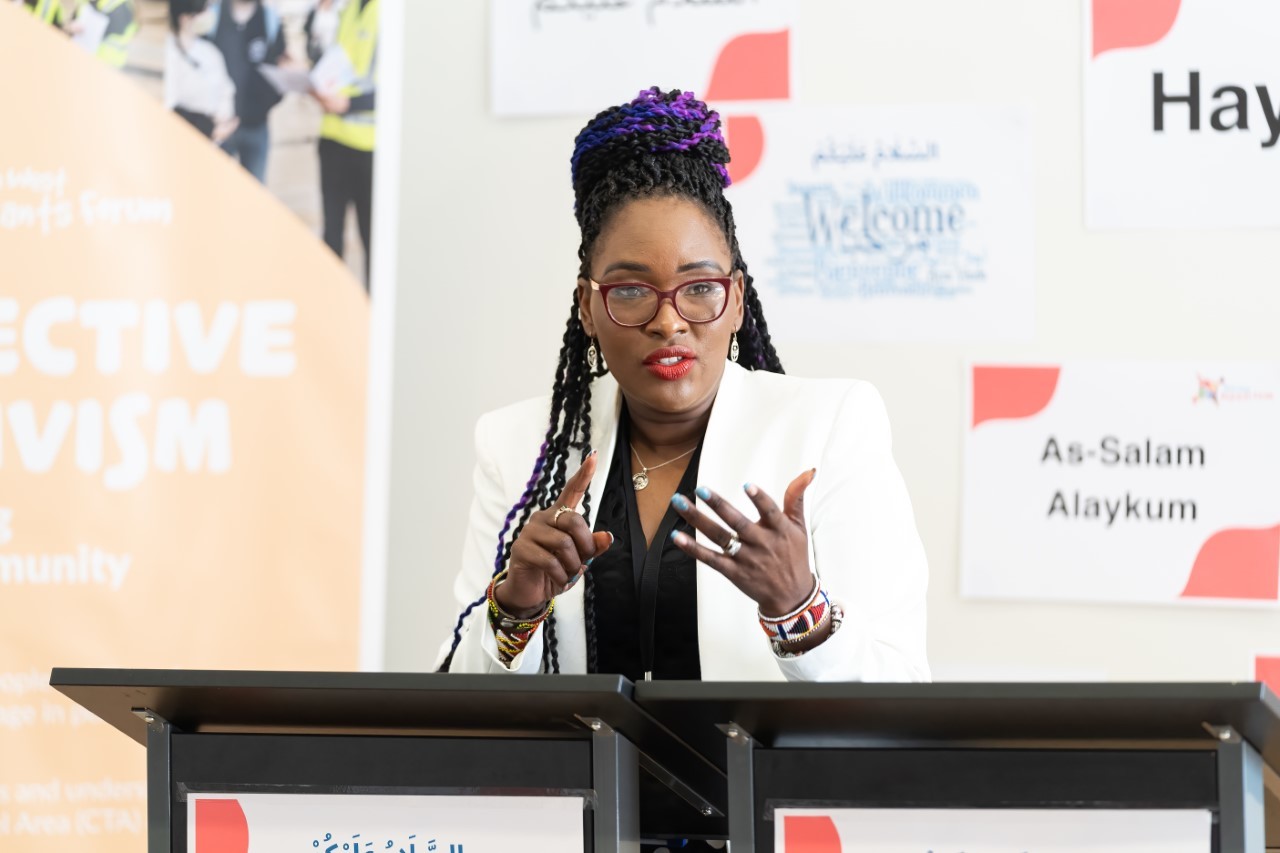 Since partition, Irish and British people have enjoyed free movement and working rights in the UK and Republic. But those rights have never been extended to the thousands of migrants who have made this island their home. And there are fears that post-Brexit rules due to be introduced by the British government next year will make freedom of movement even more difficult. The Detail is publishing a series of articles which highlight the impact of the border on migrants. In the second of our stories, Luke Butterly explores how some ethnic minorities fear they are being racially profiled during immigration checks.

ETHNIC minority citizens and migrants have said they fear being racially profiled during immigration checks on journeys to and from Northern Ireland.

Lilian Seenoi-Barr, an SDLP representative and Northern Ireland’s only black councillor, told The Detail she was profiled while travelling with her family from Northern Ireland to Scotland by ferry.

And Indian-born writer Chandrika Narayanan-Mohan, now a resident in Dublin, said she always makes sure to carry documentation in case she is stopped while crossing the border into Northern Ireland.

Civil society groups on both sides of the border have raised concerns about “selective passport checks” on journeys to and from Northern Ireland.

They have alleged that these checks have an element of racial profiling, including against Irish and British citizens.

Ms Seenoi-Barr said at one ferry terminal in Scotland, her husband, who is white, was waved through but she and her son were stopped and questioned by immigration officials.

She said they were singled out as the only black people on that trip.

Despite being a British citizen, she was asked where she came from originally and what she was doing in Scotland.

When she asked the officer under which legislation she was being questioned, he let her go.

“It's not pleasant, where you're just anticipating that you're going to be stopped,” she said.

“I don't need to carry my British passport when I'm going, but I feel I must carry it.”

The family have stopped taking the ferry when travelling to Scotland, even though it is more convenient, to avoid such experiences.

“I spoke to so many people who said exactly the same,” she said.

“That's why they stopped travelling to places like Scotland.

“So if you live here in the north and you have the right to live here, why should you not feel comfortable and free to travel across Europe, across the UK and Ireland.”

The UK Government has denied that racial profiling takes place during checks and said they rely on “intelligence”.

However, Ms Seenoi-Barr claimed: “The intelligence they have is that every single person who is not white should be stopped.”

Ms Narayanan-Mohan, who has applied for Irish citizenship, carries her Indian passport, her Irish residence permit and her multi-entry visitor’s visa to the UK every time she crosses the border into Northern Ireland.

“Right now. I wouldn't risk it. You just are too scared of getting into any trouble, even if it's a misunderstanding, that could jeopardise my citizenship,” she said.

However, if she is awarded Irish citizenship she is determined not to carry documentation.

“After I'm a citizen, I don't see why I should carry it,” she said.

“If they picked me out because I'm not a white Irish looking person, what are they going to do? And if I do get in trouble with the guards, at least at that point my right to live here won't be at stake any more.

“I say that now, feeling very confident. Maybe I won't feel so confident once that happened.”

Checks are also carried out in towns and cities including Belfast, Newry, Derry, Craigavon and Enniskillen.

A total of 2,944 people were arrested during such checks.

Úna Boyd of Belfast-based human rights group the Committee on the Administration of Justice said that the “startling” number of reported checks are only “the tip of the iceberg”.

She said the “true number may well be higher due to the amount of informal checks on passengers that don’t get registered”.

“Because the vast majority of checks that take place are those very informal ones that have no legal basis, they are not strictly speaking immigration checks,” she said. 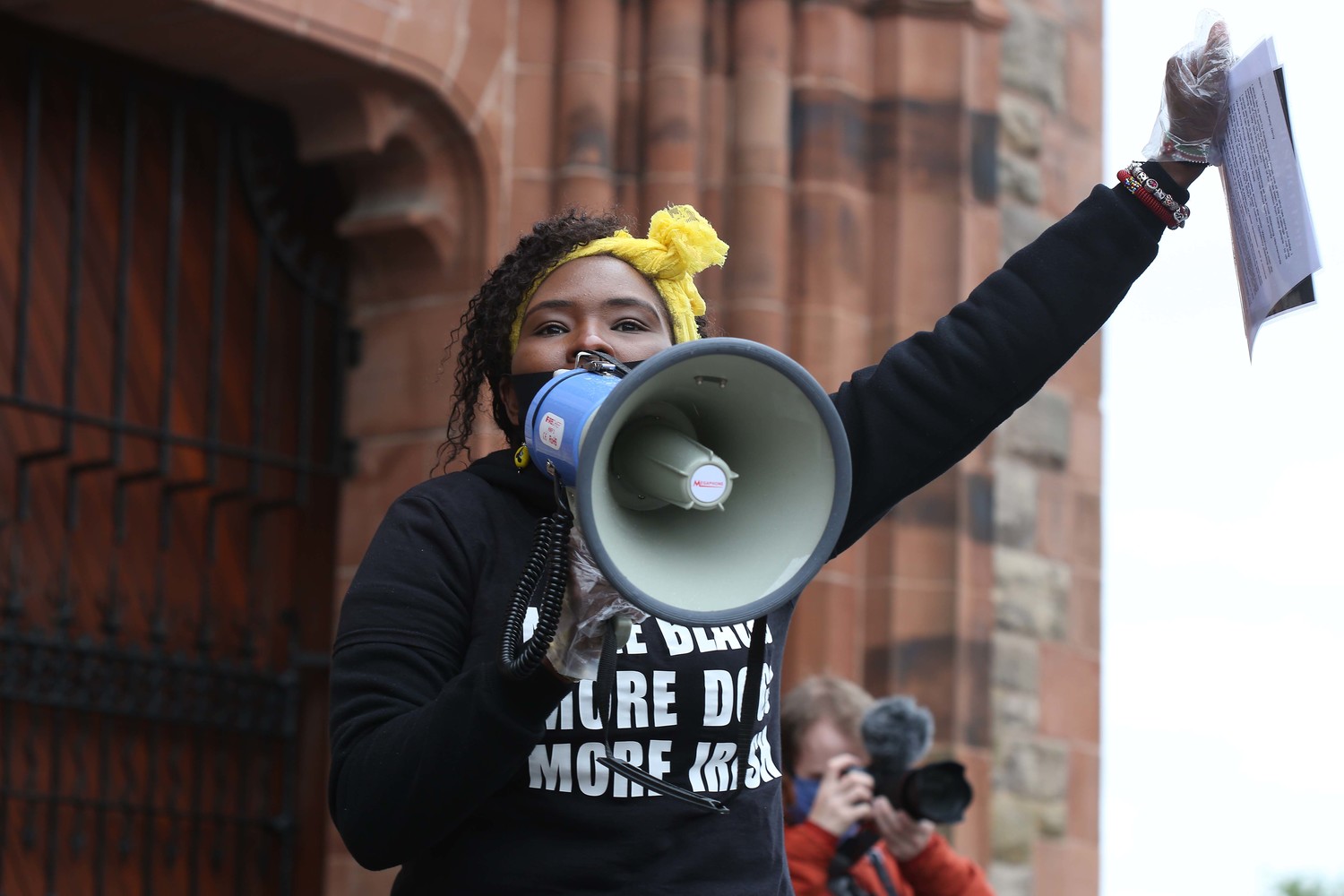 Romanian and Chinese citizens are more likely to be checked by immigration officials than any other nationals.

From 2020 to early 2022, Romanian nationals were the most stopped, accounting for around 22% of checks.

During a parliamentary inquiry last year, Alliance deputy leader Stephen Farry MP said he has never been stopped when journeying to and from Britain but “virtually everyone I speak to from a black or minority ethnic background in Northern Ireland relays that they have been pulled aside much more frequently than others”.

Home Office Minister Kevin Foster said at the time that racial profiling should not be taking place.

“Many of them (UK immigration agents) would be as concerned as you or I would be to hear that a citizen of this country, travelling within this country, has been pulled aside, potentially only for the reason of how they look,” he said.

“There are no routine immigration controls between the UK and Ireland within the Common Travel Area, and none whatsoever on the land border between Ireland and Northern Ireland – this will not change,” he said.

“Intelligence led operations to tackle known abuse of the CTA only occur away from the border and do not use any racial profiling – to suggest otherwise is completely wrong.”

The Northern Ireland border is also policed by Irish immigration officials at airports in the Republic.

Hundreds of people are refused entry at Dublin airport each year, on the grounds that they may later enter Northern Ireland or Britain.

Between 2016 and 2019, up to 500 people each year were refused entry into the Republic at Dublin airport for this reason, according to figures obtained from the Department of Justice.

That number dropped to around 170 per year during the pandemic.

A spokesman for the department said that each passenger “is assessed on their own merits, taking all relevant information into consideration at that time”.

“The state has a duty to protect its borders and to ensure that all arriving passengers are entitled to enter the state,” he said.

“This is a fundamental exercise of state sovereignty, which is necessary to protect the security of the state and to prevent illegal immigration.

“It has always been the case that Ireland and the United Kingdom cooperate closely on jointly securing the external border of the Common Travel Area (CTA).

“A central feature of the operation of the CTA has been that each state enforces the other's conditions of landing for non-EEA nationals, thus protecting each other's borders.” 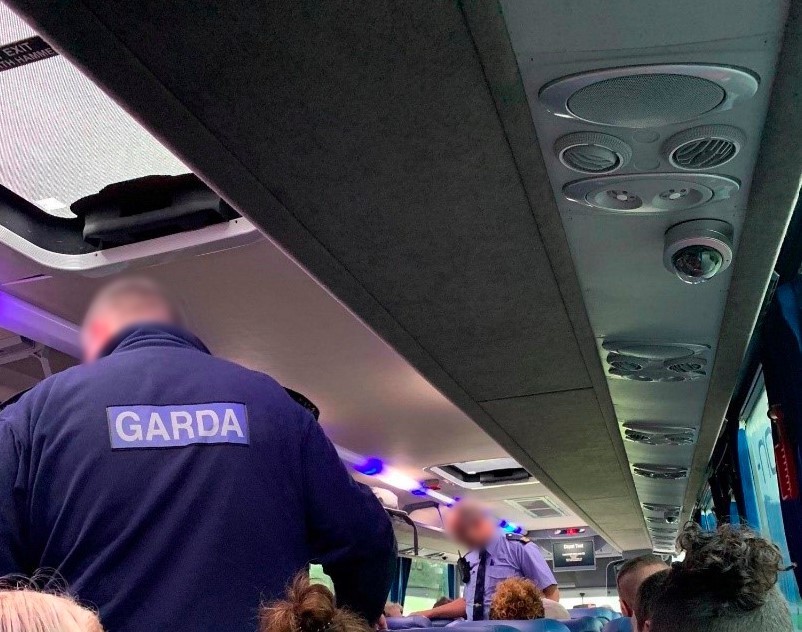 An immigration check on a cross-border Belfast to Dublin bus. Picture courtesy of End Deportations Belfast

Statistics provided to EU agency Eurostat show that hundreds of people are refused entry into the Republic at the land border by gardaí each year.

Earlier this year, the Irish Human Rights and Equality Commission (IHREC) raised the issue of racial profiling during immigration checks by gardaí on public transport travelling from Northern Ireland to the Republic.

Civic society groups including Derry-based North West Migrants Forum (NWMF) have also complained that people have been stopped on buses and trains after they cross the border into the Republic.

An Garda Síochána told the Republic’s Policing Authority that the issue remains a “challenge” for the force, and that immigration-related policing instructions are been reviewed in light of allegations of racial profiling and other “legitmate questions that have been asked”.

Assistant Commissioner John O’Driscoll said the review will “perhaps provide clearer instruction for those who are tasked with enforcing immigration controls, and (provide) a better understanding of for those who may be subject of those checks”.

Earlier this month, Taoiseach Micheál Martin appeared to dispute allegations of racial profiling at the border.

"I don't accept there is a hard border. There is an issue around migrant issues…But there's no hard border there either, in terms of people being racially profiled,” he told the Dáil.

NWMF disputed Mr Martin’s remarks. The group said it had presented evidence on the issue to Mr Martin and his Fianna Fáil colleagues.

“He appeared to downplay the direct experiences of our service users and others who've contacted us, who've been subject to racial profiling whilst travelling on cross-border bus and train services," the group said.

An Garda Síochána did not answer questions relating to allegations of racial profiling or on the review mentioned earlier this year, but provided information on their checks on public transport travelling from Northern Ireland to the Republic.

“Immigration checks along the International Border with Northern Ireland are carried out by Garda Immigration Units, both preventative and intelligence-led, including checks on public transport or other public service vehicles travelling from Northern Ireland,” a Garda spokesman said.

This article was supported through a Social Change Initiative fellowship.

Luke Butterly is a freelance journalist in Belfast.