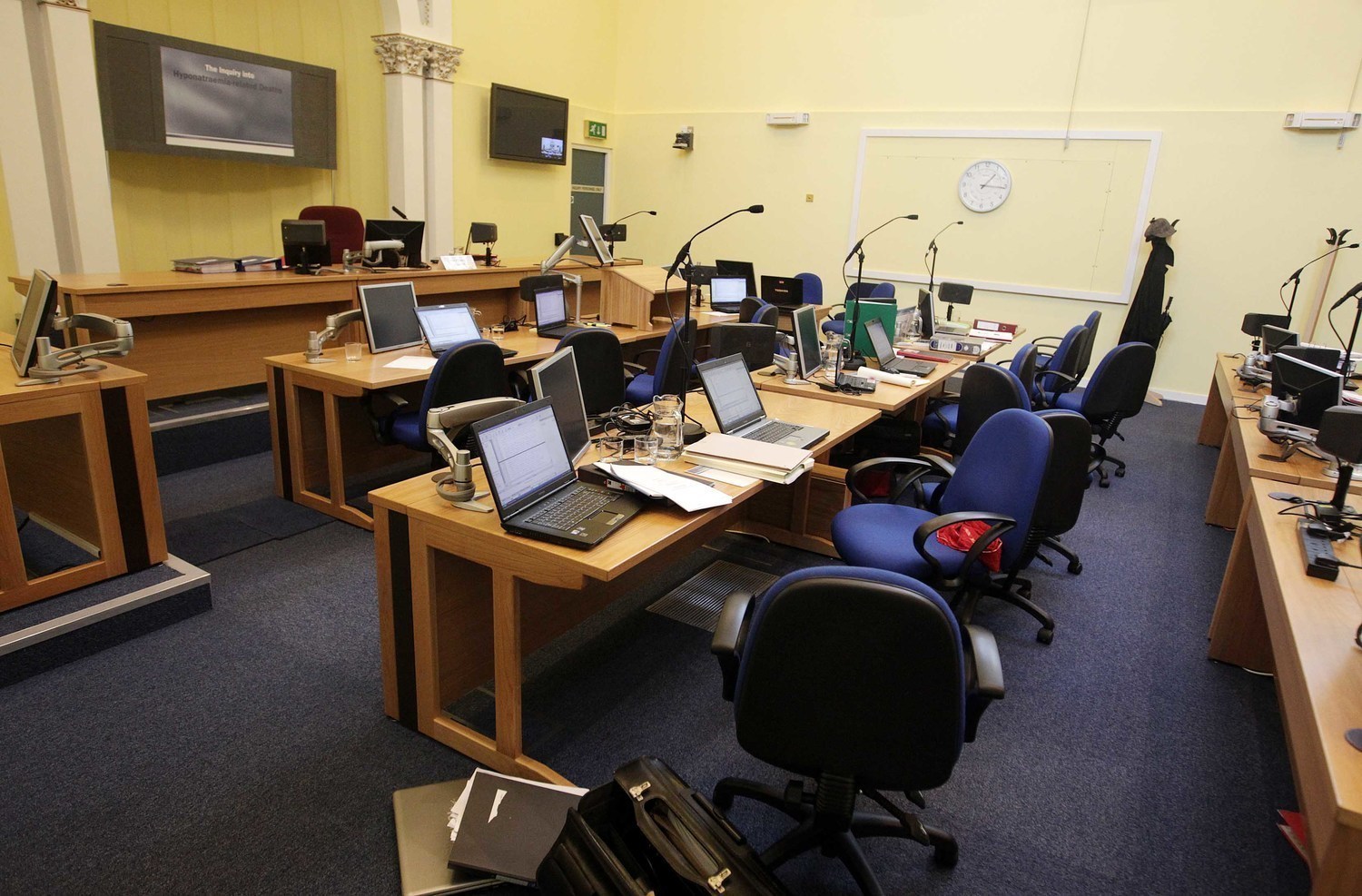 • On 1st November 2004 Northern Ireland Health Minister Angela Smith MP announced that she had appointed Justice John O'Hara to conduct an inquiry into the issues raised by the UTV Insight programme, When Hospital Kills.

• On 19th November 2004 Mr Justice O’Hara released a statement saying: “The Terms of Reference require me to report by 1 June 2005 or such other date as may be agreed with the Department. I will do everything I can to complete my work within that period. At this stage however it is not possible to predict exactly what issues will emerge in the months ahead.”

• In 2008 the police indicated that their investigations were complete and the Public Prosecution Service directed that there would be no prosecutions. As a result the inquiry announced the resumption of its work at a progress hearing on 30th May 2008.

• From May 2008 there were a number of progress hearings and the public hearings were due to start in November 2011, but were delayed when the inquiry was made aware of new documents discovered by the Belfast Trust.

• At the end of the public hearings the inquiry chairman stated that he hoped to complete his report to the Minister by the end of January 2014.

• However on 27th January 2014 the chairman issued an update stating that the report would not be available until May 2014. He stated: “While substantial progress has been made it will simply not be possible to have the report finalised within that timescale. Quite apart from the huge number of transcripts, witness and expert statements which have to be cross-referenced I have received extensive written submissions from various parties in recent weeks. The task requires scrutiny, consideration and all to be taken into account in order to ensure fairness to all concerned. This is a necessary and time-consuming process. The end result is that it is likely that the report will not now be available until May 2014.”

• In the same statement he said: “While I am tasked by my Terms of Reference with reporting to the Minister, the parties and the public are entitled to see the report without significant delay.”

• On 29th May 2014 the chairman issued a further note outlining that the report was not yet ready to be published. It stated: “I continue to make progress with my report and will carry on working on it over the summer months. In September, I will issue a further update and advise everyone of the proposed publication date. I am grateful to everyone for their continuing co-operation with the Inquiry.”

• Another statement was issued by the chairman on 24th September 2014 outlining that there would be further delay. It stated: “I am aware that everyone involved would like to see my report published as soon as possible. I share that view. However I have a duty to ensure that my report is both full and fair. It will be remembered that the Inquiry collated evidence and carried out its investigations for a number of years following which I heard evidence over 148 days from 179 witnesses. In light of that history I hope that the demanding and meticulous nature of the report process will be appreciated. While every effort has been made to achieve a publication date before the end of this year, I do not now anticipate that this will occur. I will continue to work apace and will issue another update in early December. At that point I expect to be able to provide a publication date. I am aware that it is difficult for everyone affected by the Inquiry to continue to await my report and I regret this delay but I can reassure all that I am working to achieve a fair and accurate reflection of all the evidence before me.”

• On 11th December 2014 a further update was issued by the chairman: “I have continued to make progress on my report and am aiming for the earliest possible publication date. I am committed to producing a comprehensive report which deals with all the important issues. This is why I am not yet in a position to publish my report. In order to avoid any further disappointment I will not give another update until I can announce the publication date. At that point I will confirm all of the precise arrangements for release of the report. I am grateful for the time and understanding which have been shown to me.”

• In June 2015 a further note was issued stating that the chairman continued to make progress and that an update would be provided in September 2015.

• In October 2015 the chairman met with a number of interested parties and informed them that while work on the report was continuing, it would not now be published until 2016. A further update was promised in Easter 2016.

• On 7th March 2016 the chairman wrote to the families stating: “As you will recall from our meeting in the autumn I promised to write to you before Easter to update you on progress with the Inquiry report. I can now indicate that I confidently expect that the report will be completed and published this year, though it will be late in the year. I hope you find this news reassuring. There is little more that I can say for now other than to suggest that I provide you with more information in September.”

• On 29th September 2016 the Chairman released a further update stating: "In March I advised that I was confident that the Inquiry report would be completed and published by the end of this year. Since then significant progress has been made on all segments of the report which will be detailed and extensive as those who are familiar with the Inquiry’s work will have anticipated. However, notwithstanding this progress, it will simply not be possible to finish it this year. I regret this and acknowledge that those who are awaiting the report will be disappointed by this news. It will be published at the earliest date in 2017 that I can achieve."

•On 7th June 2017 a further updated was issued by the inquiry stating that the report will be published in Autumn 2017.

•22nd November 2017 update from chairman confirms report will not be published before the end of 2017 but commits to date of Wednesday 31st January2018 as offical date that report will be published on.