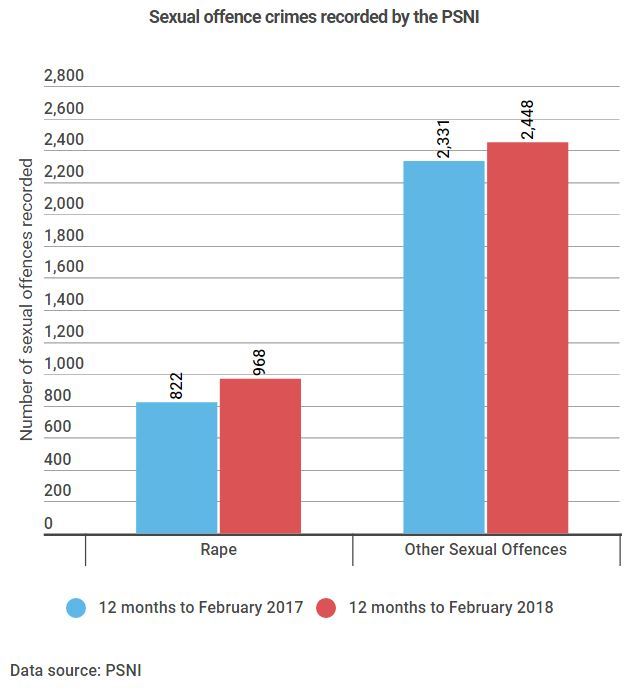 ALMOST 1,000 rapes were reported to the Police Service of Northern Ireland in the last 12 months – an 18% increase on the previous year.

The PSNI has confirmed that 968 rape crimes and 2,448 other sexual offences were recorded in the year up to the end of February 2018.

This equates to an average of 80 rapes and over 200 other sexual offences being reported each month.

The sexual offence crime figures were published by the PSNI on March 29th – the day after Ireland and Ulster rugby players Paddy Jackson and Stuart Olding were found not guilty of raping the same woman in June 2016.

Crime statistics are regularly published by the police.

The PSNI has also confirmed to The Detail that during January and February of this year – when the trial was running – there was an increase of 20 additional referrals of rape and sexual assault compared to the same period in 2017.

It is important to note that not all sexual crimes will have been reported to the police.

The latest PSNI crime bulletin also shows that only 5% of the rape crimes (51 cases) reported in the year up to the end of February this year have been disposed of by a charge or summons. This compares to 8.6% of the rapes reported the previous year.

There was a charge/summons outcome for 45% of drug offences recorded within the last year, 27% of robberies and 32% of shoplifting cases.

Detective Superintendent Deirdre Bones, from the PSNI’s Public Protection Branch, described the outcome rate for rape crimes as “disappointing” and said there are many reasons for this including the injured party in some cases deciding not to progress an investigation and the Public Prosecution Service directing no prosecution.

Of the 2,448 other sexual offences reported in the 12 months to the end of February 2018, 319 (13%) resulted in a charge or summons, 20 cases were dealt with by way of a caution, six were disposed of with a “community resolution” and in two cases penalty notices for disorder were given.

The figures we are reporting on today were compiled on March 27th by the PSNI using data extracted from the police administrative system on that date. The figures are provisional until the finalised 2017/18 data is published in May.

Naiobh Adams, from Women’s Aid Federation in NI and deputy manager of the 24 hour Domestic and Sexual Violence Helpline, told The Detail there were 808 calls to the helpline between April 2017 and March 2018 where sexual violence was the main presenting issue.

And Nexus NI, which offers services and support to people who have been affected by sexual violence, received more than 250 referrals for its specialist counselling services in January of this year alone.

Detective Superintendent Bones said: “The increase in the number of reported rapes demonstrates that people have more confidence to come forward to police and report them. This must, however, be considered in the context that rape is an extremely impactive and violent crime and ultimately any rape is one too many.

“For example, in just under half of reports, the injured party has personally decided that they do not wish to progress an investigation through the criminal justice system. In some cases, the Public Prosecution Service has directed ‘no prosecution’ as the investigation did not pass the evidential test. It also includes some cases which have been heard in court and where a ‘not guilty’ verdict has been found by the jury.

“The Police Service of Northern Ireland is currently undertaking research with victims to ascertain the reasons why injured parties withdraw from an investigation in order to understand what can be done to encourage them to progress an investigation through the criminal justice system.”

She continued: “As police officers our role is to keep people safe. Anyone can be the victim of sexual crime regardless of age, background, status or gender.

“There is no room in society for tolerance of sexual crime. We understand how difficult it can be for someone to report a rape, but let me assure you that if you choose to speak to police, you will be listened to, respected, treated sensitively, have your report thoroughly investigated, and you will be signposted to support services such as Nexus and Victim Support among others.

“If a person feels they cannot formally report it at the time, they can also self-refer to The Rowan Sexual Assault Referral Centre in Antrim where they will get the medical and support services needed. If, at a later date, a victim chooses to report to police, an investigation will be commenced.

“Officers within Public Protection Branch are committed to rigorously investigating reports of sexual crime and our dedicated Rape Crime Unit will work tirelessly and impartially on all reports made.

“We diligently follow all investigative lines of enquiry. As such, we will continue to work hard to improve outcomes for offences of rape and sexual assault working in collaboration with the Public Prosecution Service and other partners. Our message is very clear: please continue to report.”

Nexus NI chief executive Cara Cash welcomed the increase in the reporting of rape “but with caution”.

She said: “We know that there is still gross under reporting of sexually violent crime, so while it is good that more victims are coming forward, we know that not all victims have found their voice yet and there is more to do in that regard.

“Ultimately, we want people to know we are here to support any victim of sexual violence across Northern Ireland.

“Nexus NI and our partner agencies are here to offer help, guidance and support to anyone who needs to talk. Alongside our specialist counselling we also offer education, training and outreach services.”

We asked Nexus if the press coverage of the Ulster rugby players’ trial and huge public interest in the case has had any impact on its work.

Ms Cash said: “Nexus NI has seen a steady increase in referrals for our specialist counselling services for many months now. In January alone, we received more than 250.

“It would be hard to tell at this stage if the trial will result in new referrals but we have certainly had more calls asking about our services, as well as a huge outpouring of support from the public, with an unprecedented level of donations.

“The legacy and lasting impact of rape, sexual violence or childhood sexual abuse should not be underestimated; it is devastating for victims.

“As an agency, Nexus wants all victims and survivors to know they are not alone; they should not be afraid to come forward and seek help; and that sexual violence is never their fault.”