No commitment to social housing in ‘masterplan’ for west Belfast land 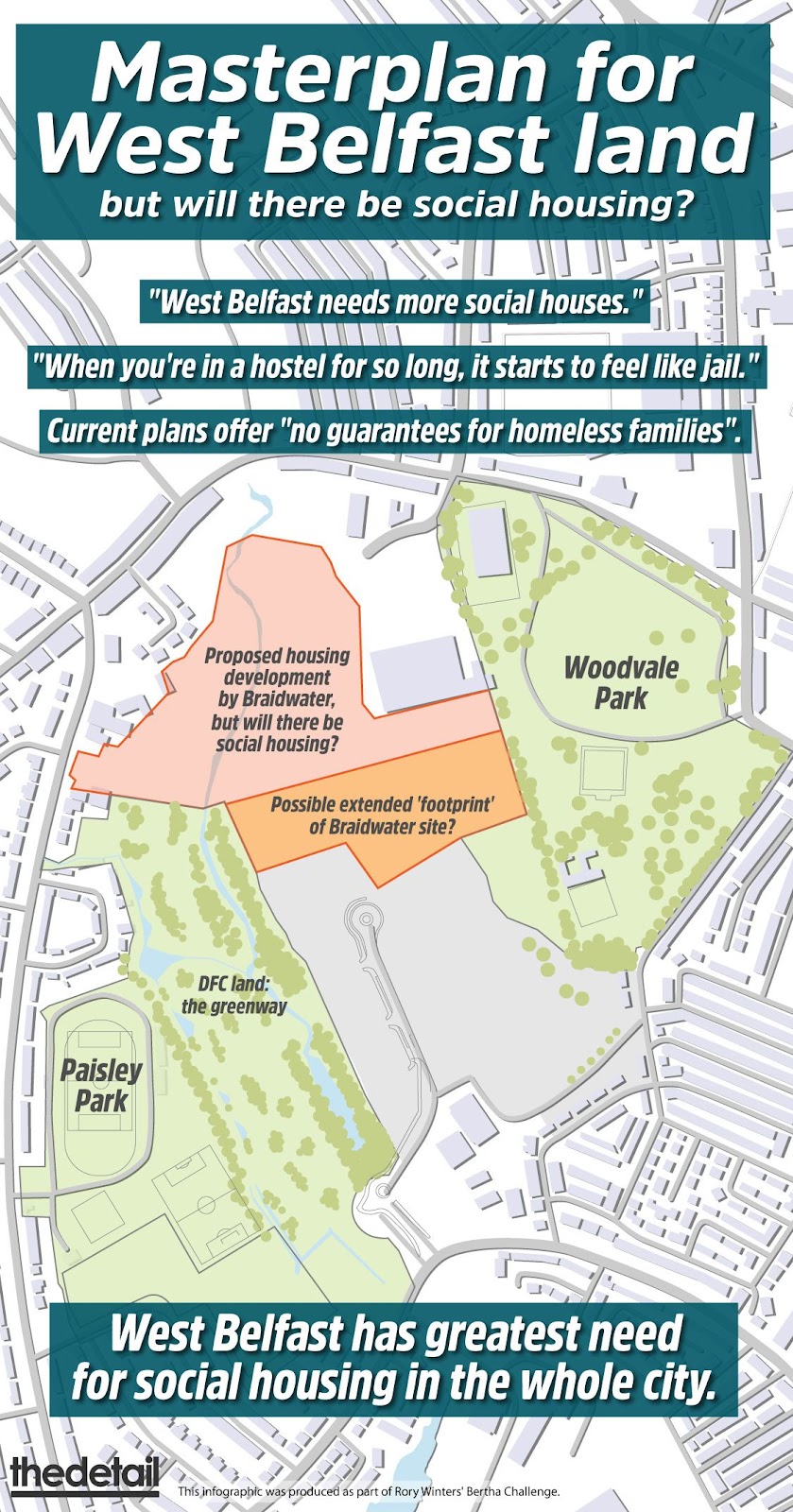 A Belfast City Council (BCC) map showing proposals for a major piece of land in west Belfast shows no evidence of plans for the development of social housing.

The land represented on the map, seen by The Detail, is part of a ‘masterplan’ which includes the site where Mackie’s factory was formerly located, as well as some of its surrounding area.

The council is proposing to deliver this masterplan as part of what it calls the 'Forth Meadow Community Greenway.'

The Mackie’s site in West Belfast is public land under the ownership of the Department for Communities (DfC), the department responsible for social housing.

Previously, The Detail reported statistics which show west Belfast is the part of the city in the greatest need of more social housing.

Despite this, the map shows that the DfC-owned land is being used for a greenway which includes pathways, ponds and green spaces, but not social housing.

Participation and the Practice of Rights (PPR) is an activist-led organisation based in Belfast which has been campaigning for social housing on the Mackie’s site for over ten years.

PPR’s Elfie Seymour told The Detail the current plans offer “no guarantees for homeless families” and that the “top priority” on public land should be new social homes.

She added that for all the families on the social housing waiting list in west Belfast "Mackie’s is a golden opportunity that can’t be wasted".

Amy Burns and her two young daughters have been living in Ardmoulin Mews Hostel in west Belfast for almost three years.

Now aged 24, she has been on the housing waiting list in west Belfast since she was 18.

Amy told The Detail: “When you’re in a hostel for so long, it starts to feel like a jail. It’s just so irritating and frustrating.”

Currently on 190 housing points, Amy will struggle to get a home until she has 210 points.

The greenway on the Mackie’s site is being proposed under BCC’s ‘reconnecting open spaces' strategy.

Both the council and the DfC have been working in tandem to forge the masterplan for Mackie’s and its surrounding area.

Also involved in the planning for the area is the Braidwater Group, a Derry-based property development company.

Land shown, connected to the DfC-owned Mackie’s site, is labelled as the ‘Braidwater site’, where some form of housing development is being proposed.

Braidwater wouldn’t tell The Detail whether it aims for this development to be private, mixed-tenure or social housing.

However, a company spokesperson said Braidwater is “a housebuilder with a track record in delivering large scale social, affordable, private market and private rented homes” throughout Northern Ireland.

The spokesperson added: “Planning for the future of this site is in the very early stages.

“Braidwater is yet to bring forward a community consultation or a planning application for the site and discussions continue with BCC and the DfC regarding the development of a greenway.”

PPR’s Elfie Seymour said that while a housing development appears to be a “major part” of the masterplan “we don’t know much else”.

She added: “It’s been very difficult to get a straight answer and the lack of clarity alongside recent planning decisions by council gives us no confidence in the current process.

"They can’t keep repeating the approaches of the past and hoping for different outcomes. This is why we have a housing crisis. We need a new way forward.”

A Freedom of Information (FoI) response which PPR received from BCC showed that some land is set to be transferred between organisations involved in the west Belfast masterplan proposals.

When questioned by The Detail, a BCC spokesperson stated that the council is not transferring land, which it owns, to Braidwater.

A DfC spokesperson, meanwhile, maintained that none of the land – labelled as the Braidwater site on the map – was ever owned by the department.

However, the Braidwater spokesperson only stated that the company is not acquiring “significant” areas of land in relation to the former Mackie’s site.

Ms Seymour called the lack of clarity, regarding this issue, “worrying”.

Ms Seymour said the meeting was “a breath of fresh air” and that Minister Ní Chuilín made her feel hopeful of a “more inclusive planning process” at Mackie’s.

She continued: “The current plan for Mackie’s has been progressed for the most part by officials during a period in which no minister was in place at the DfC.”

During the meeting, PPR submitted proposals for sustainable social housing at Mackie’s to the minister.

Ms Seymour said: “We presented our vision to transform Mackie's into an exemplar of democratic and sustainable development – a prototype for housing developments of the future.

“West Belfast has long suffered the worst of social and economic inequality.

“We now have a chance to do something new, hopeful and transformative and we look forward to working with the minister to make it happen.”

She took part in the meeting with Minister Ní Chuilín on behalf of the Take Back The City campaign which is made up of a coalition of experts in architecture, planning, finance and sustainability who are supportive of PPR’s housing activism.

Dr Martire told The Detail: “The brownfield land known as the Mackie's site gives the once-in-a-generation opportunity to develop much needed housing in one of the most deprived areas of Belfast, but housing should not be developed in isolation.

“The services and amenities needed for everyday life should be at close distance.

“The site has the potential of becoming a mixed-tenure and mixed-use community. Dividing and segregating land for different uses is an outdated model of living.”

She continued: “This site can provide just that, but only if the right regulations and design are in place."

Department for Infrastructure (DfI) Minister Nichola Mallon recently announced her department was committing £375,000 towards delivering the Forth Meadow Community Greenway.

The proposals are also being funded by Peace IV European Union money and further capital grants.

Dr Martire said: “We are ready to collaborate with DfC, DfI and BCC to provide ideas for a complete neighbourhood with gentle density and social, public, cooperative and affordable housing.”

BCC recently posted an online survey which allowed the public to share their thoughts on the Forth Meadow Community Greenway plan.

The survey received 273 responses. However, it was only open to the public for one week.

PPR's Marissa McMahon told The Detail: "We only became aware of this consultation on the day it was closing. We weren’t notified by the council despite having received assurances in the past."

Calling for greater openness, transparency and accountability, she added that PPR wants to engage with the relevant government agencies to enable everyone "including the families who are waiting for a place to call home in the area, to shape what happens next".

The housing rights activist continued: "The planning process for Mackie's has excluded many thousands of families in housing need from the conversation and it’s time for change."