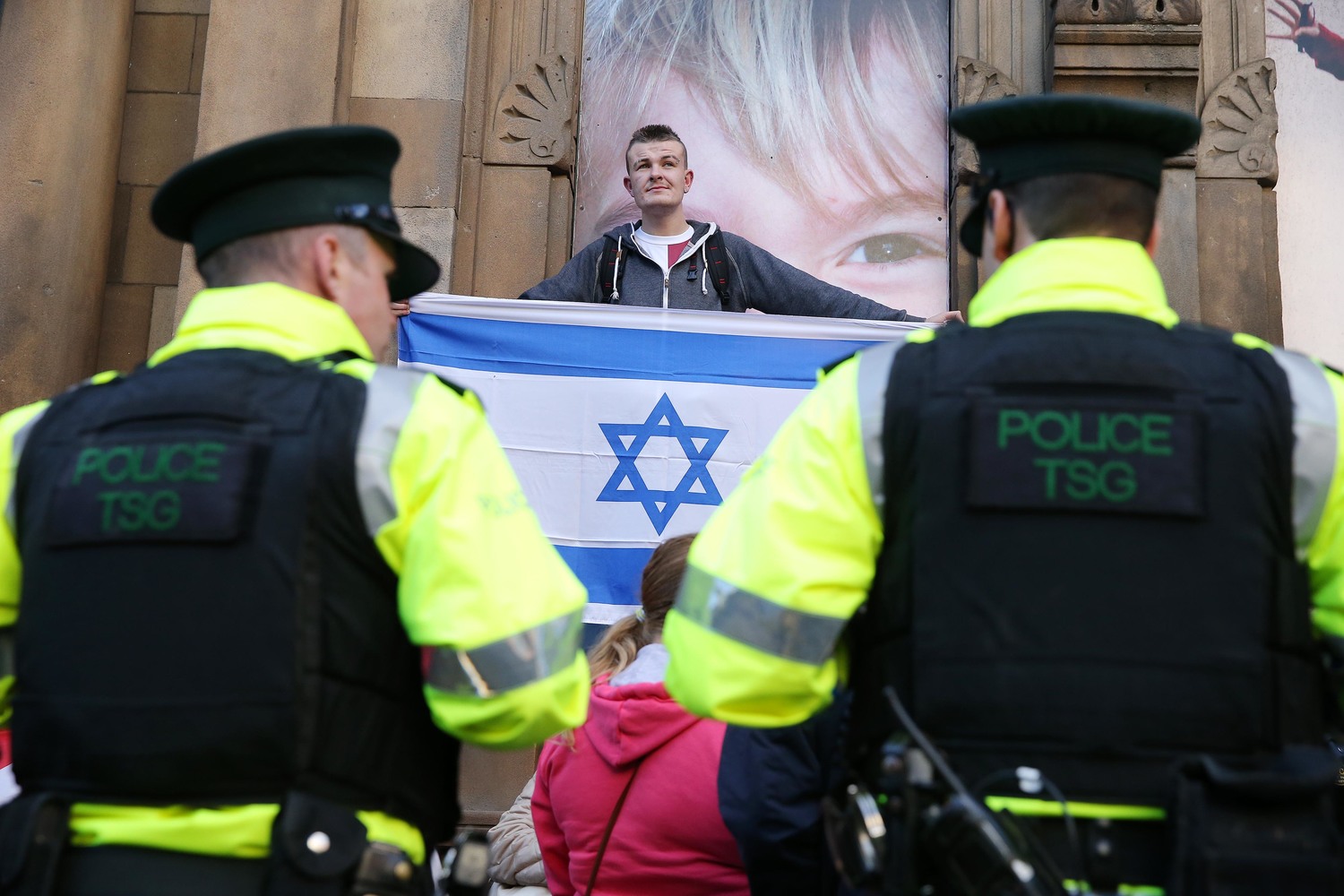 A protester in Belfast holds up an Israeli flag in front of two PSNI officers. Photo by Kelvin Boyes, Press Eye.

THE Police Service of Northern Ireland (PSNI) is working on at least four security research projects which involve the Israeli ministry responsible for police and prisons, or a company providing surveillance to Israeli settlements.

All of these projects are funded by the European Union (EU) under the €1.7bn security stream of Horizon 2020, an €80bn investment programme.

In addition, The Detail has found that the PSNI previously worked on at least three other completed projects with Israeli organisations either linked to the Israeli police or military, or which have been accused of selling surveillance technology to oppressive governments overseas.

Israel’s police and prison services have long been accused of serious human rights violations against Palestinians, including torture, while settlements are recognised as illegal by the UK, Ireland and the EU.

Amnesty International’s Northern Ireland director, Patrick Corrigan, told The Detail: “As a matter of urgency, the PSNI should suspend all programmes with the Israeli police and security services where there’s a clear risk of involvement in human rights violations.

“This needs to come as part of a wider halt to all military and police exports from the UK to Israel, including any training and technology which could lead to further human rights violations.

“Northern Ireland, and particularly our police service, must ensure it is not implicated in Israel’s human rights violations.

“The distressing scenes from East Jerusalem and Gaza should now be a wake-up call.”

Last month the international non-governmental organisation, Human Rights Watch, said that actions of Israeli authorities against Palestinans are so severe that they amount to “apartheid”.

Israeli police and prisons, which are controlled by the Ministry of Public Security involved in two research projects with the PSNI, were strongly criticised for their treatment of Palestinians in this report.

The Human Rights Watch report also states that Israeli authorities have “dispossessed, confined, forcibly separated, and subjugated Palestinians by virtue of their identity to varying degrees of intensity. In certain areas...these deprivations are so severe that they amount to the crimes against humanity of apartheid and persecution”.

In response to the issues raised in this article, PSNI Assistant Chief Constable Bobby Singleton said that Horizon 2020 funds “groundbreaking research” in the EU and globally.

He also told The Detail: “While technological advances are critical to ensuring continued public safety and confidence, so too is ensuring that all research complies with ethical standards.

“As well as ethics, consideration is also given to the projects’ legal and societal impacts.

“Any allegations of unethical or illegal actions relating to participation in a Horizon 2020 project should be reported to the European Commission.” 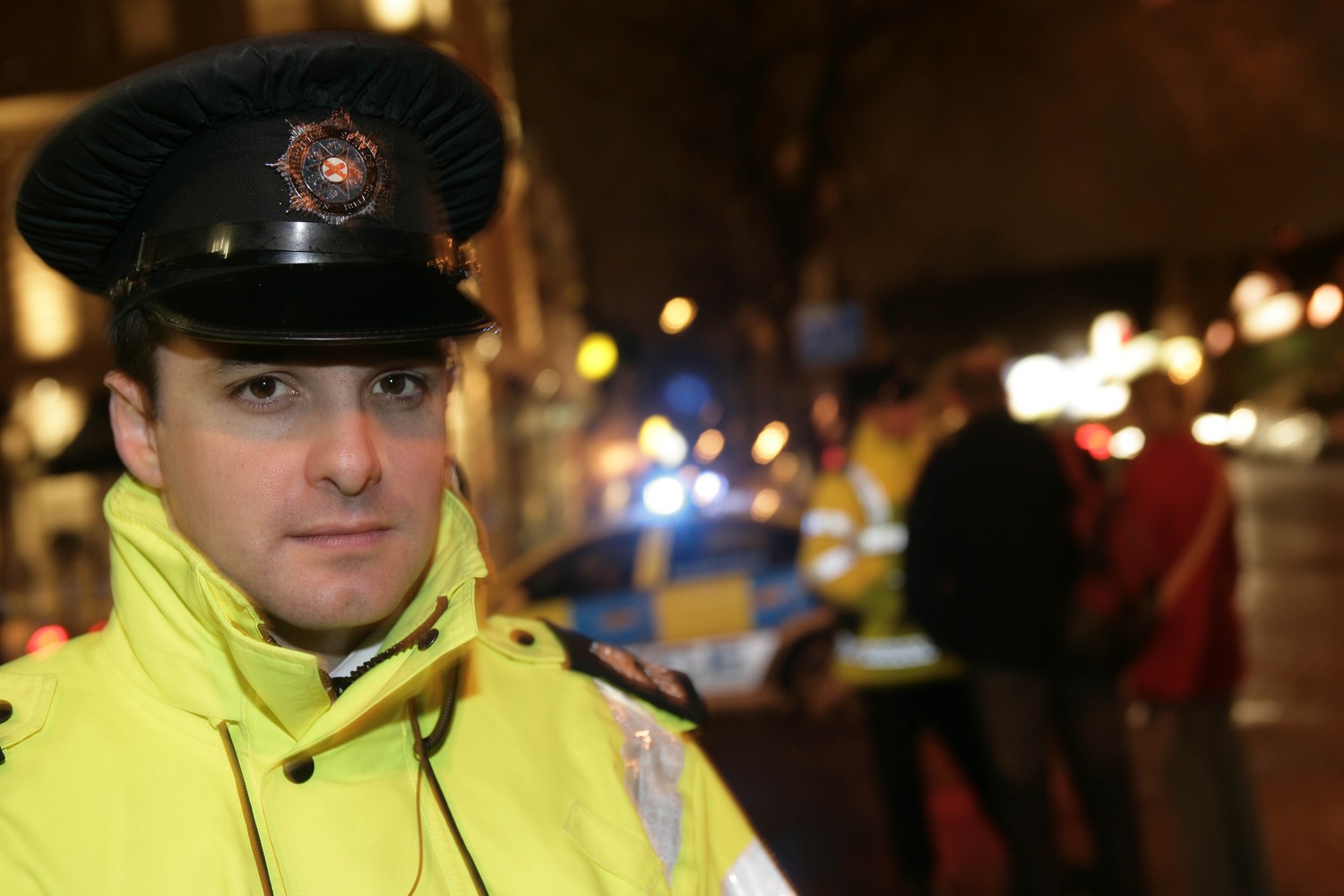 One of the PSNI’s ongoing projects with Israel’s Ministry of Public Security is known as ‘Roxanne’. The project aims to develop surveillance technology that identifies people involved in organised crime and terrorism – through analysis of private telephone calls, texts, speech patterns and video.

The PSNI is also working on a separate security research project with the Israeli Ministry of Public Security, called the ILEAnet project, which aims to “set up and develop a sustainable network of law enforcement agency practitioner organisations from all over Europe”.

In addition, the PSNI is currently involved in two projects, called CREST and CONNEXIONs, with a private company called Motorola Solutions Israel, a subsidiary of the telecoms giant.

Both projects aim to create predictive policing tools for law enforcement, ranging from monitoring online content or relying on data from social media and the dark web.

The report states that Motorola, and its subsidiary Motorola Solutions Israel, are supplying “surveillance and identification equipment for settlements, the wall and checkpoints directly linked with settlements”.

The British and Irish governments, along with the EU, recognise that Israeli settlements are illegal under international law and an obstacle to peace.

As well as these four ongoing Horizon 2020 projects, in the past decade the PSNI was involved in at least three more security research projects with Israeli organisations either linked to the Israeli police or military or which have been accused of selling surveillance tech to oppressive governments overseas.

In February 2021, Amnesty International reported that the Israeli subsidiary of Verint provided South Sudan’s National Security Services (NSS) with “communications interception equipment”. The NSS has a record of intimidating, arbitrarily detaining and forcibly disappearing government critics, according to Amnesty.

Another previous research project, which the PSNI was a partner in called HOMER, aimed to combat homemade explosives.

The project featured a division of the Tamar Group, self-described as “the leading civilian body in the field of explosives in Israel”, with customers including both the Israeli Police and Ministry of Defense.

A third project featured Technion - Israel Institute of Technology, a world-renowned university but one that has been criticised for its research and development into military technology used in Palestine, including drone technology and the development of the remote-controlled D-9 bulldozers, which the BBC reported have “been used to knock down buildings, flatten olive groves and clear paths for advancing soldiers”.

Verint, the Tamar Group and Motorola were all contacted but none provided a comment.

Meanwhile, a Technion - Israel Institute of technology spokesperson referenced how there had been numerous terror attacks in Europe in recent years and that this technology could save lives.

The spokesperson also told The Detail: “Such technology is crucial for homeland security, environmental cleaning and humanitarian efforts.” 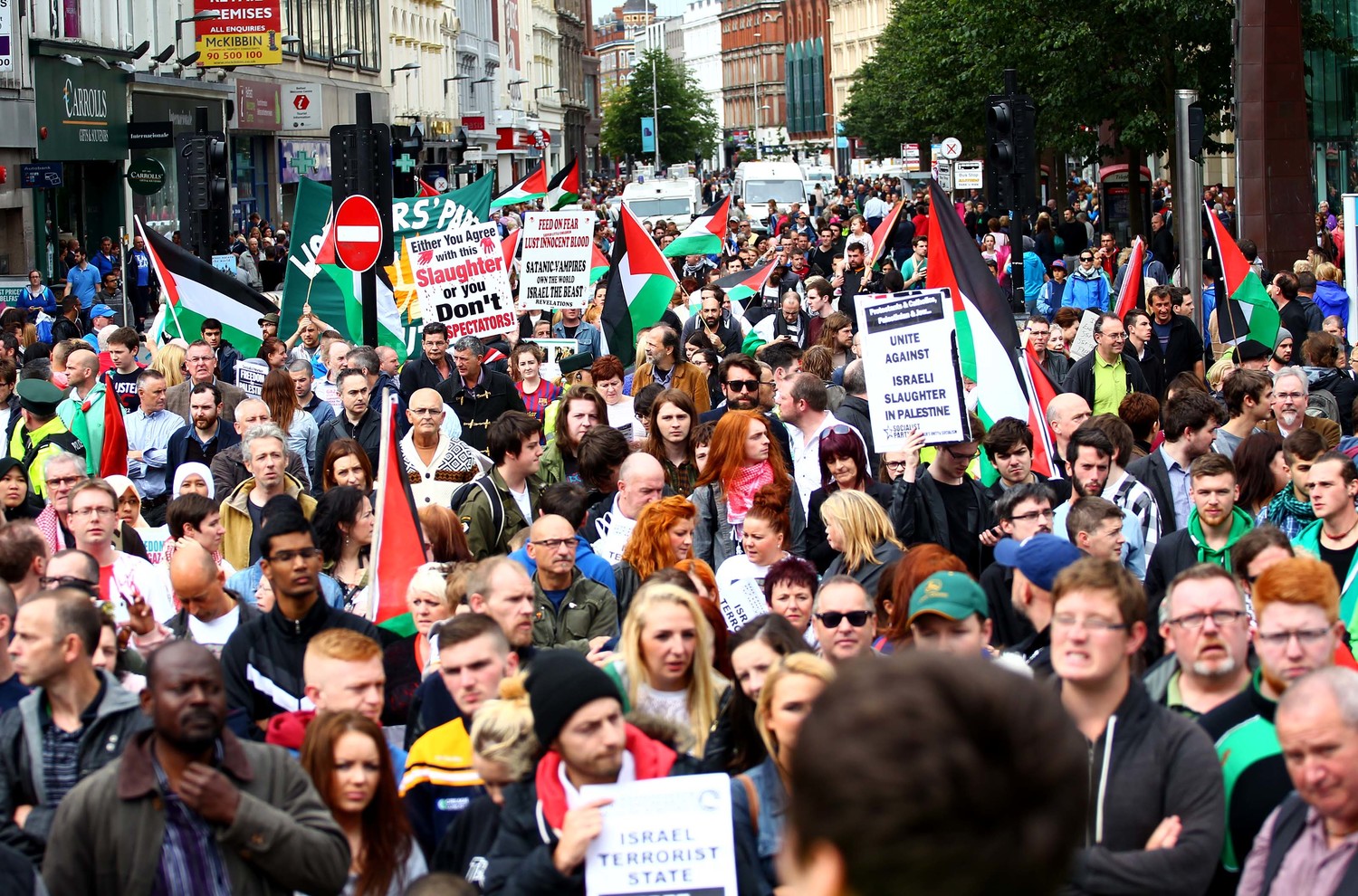 A leading Palestinian advocacy group in Ireland has said what The Detail has uncovered is “deeply shocking” and that the PSNI should cease engaging in projects connected to Israeli security agencies.

Fatin Al Tamimi, chairperson of the Irish Palestine Solidarity Campaign, told us: “It's frankly hypocritical that an institution that purports to defend law and order, and to uphold human rights, can then collaborate with entities such as the Israeli Ministry of Public Security, the Technion or Motorola Solutions – all vital cogs in the maintence of Israel's apartheid regime.”

Ms Al Tamimi also criticised the EU for its willingness to “jettison its commitments to human rights and international law” for facilitating this form of Israeli involvement in Horizon 2020.

The Israeli Ministry of Public Security received over €2.26 million for 18 different projects from 2011 to 2022, according to Open Security Data Europe.

Israel is currently in informal exploratory talks with the EU about joining the new ‘Horizon Europe’ funding stream, which will run from 2021-2027. Just under €1.6bn will be set aside for security research projects.

A spokesperson for the European Commission said it condemns “all forms of human rights violations...as reflected at EU level in the Charter of Fundamental Rights”.

Research and innovation activities funded through Horizon must comply with strict ethical principles and relevant national, European Union and international legislation, we were told.

The European Commission spokesperson added that Israeli entities must have their place of establishment within Israel's pre-1967 borders and cannot carry out research activities in the Occupied Palestinian Territories.

However, Patrick Corrigan of Amnesty International called the PSNI’s engagement in these projects “highly questionable”.

He referenced Israeli authorities’ “long record of institutionalised discrimination against Palestinians in both Israel and the Occupied Palestinian Territories, the frequent use of excessive force against Palestinians and the collective punishment of the entire population of Gaza through an illegal blockade”.

Mr Corrigan added: “If the Chief Constable refuses to act, the Policing Board and the Northern Ireland Justice Minister must make their position clear.”

The Department of Justice said: “Participation in European Union Horizon 2020 is an operational matter for the PSNI, which is accountable to the Northern Ireland Policing Board (NIPB).”

Meanwhile, a spokesperson for the NIPB told The Detail that the board is “not routinely advised of EU research projects that the PSNI are partner to”.

The NIPB also said that the PSNI “must fully comply with the PSNI Code of Ethics which sets out the legislative and human rights standards”.

We contacted the UK's Israeli Embassy, but Ambassador Tzipi Hotovely has not provided a comment.

However, the Israeli Embassy in Ireland previously told The Times: "In terms of Israel’s participation in the Roxanne project, the Israel national police uphold the rule of law and adhere to the highest of standards in maintaining fundamental rights...while facing complex challenges from terrorism and criminality.”

The embassy added that there was a “tremendous amount of ongoing cooperation” between Israel and the EU, based on “shared values and a common world view”.