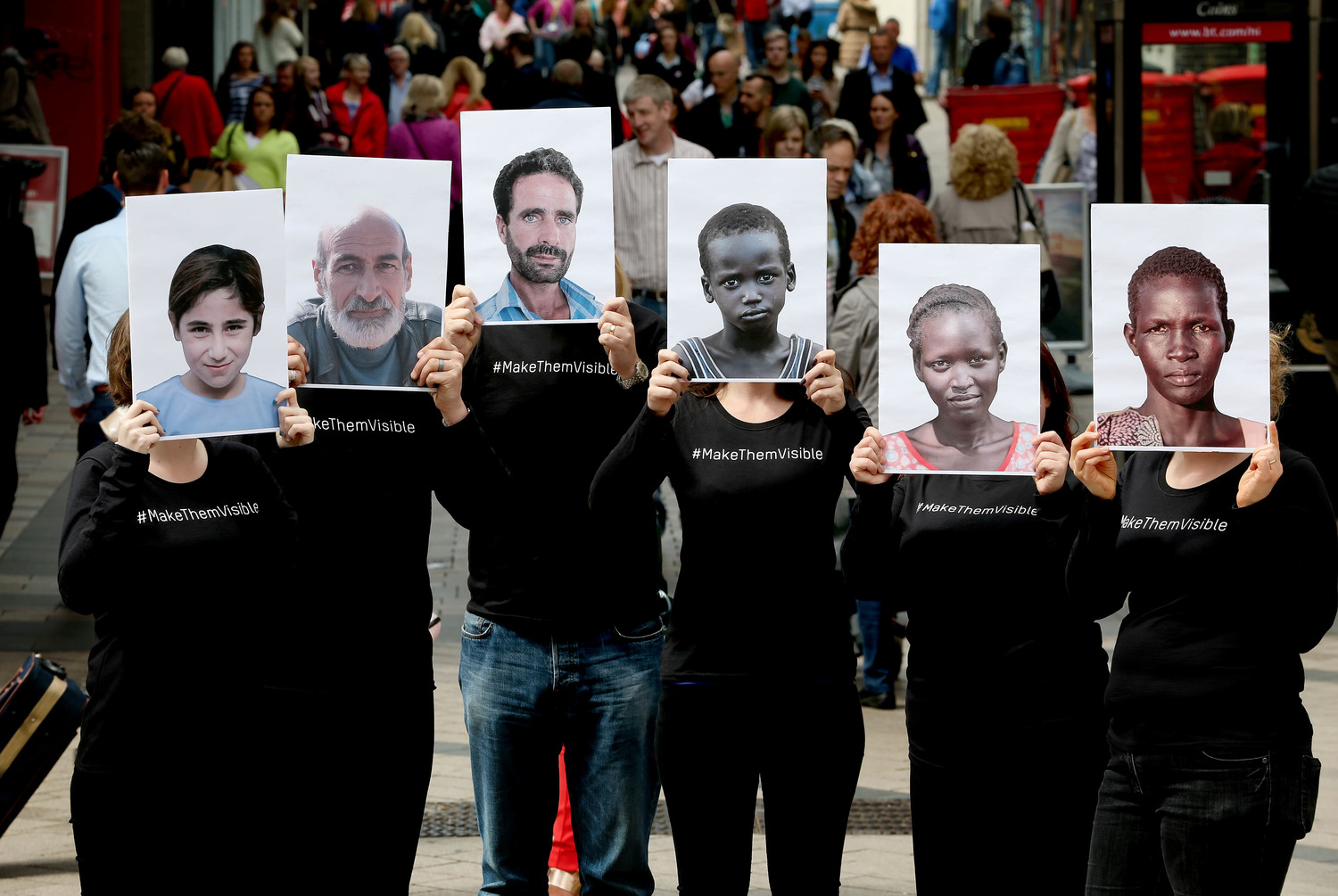 Oxfam Ireland volunteers carrying out the 'Make Them Visible' campaign about people displaced by conflict around the world. Photo by Matt Mackey, Press Eye.

THERE has been a significant increase in nationals from some of the world’s top refugee-producing countries being refused entry to Ireland during the pandemic.

Nationals from Eritrea, Syria, Yemen, Afghanistan, Somalia and other countries experiencing war have been refused ‘leave to land’ in Ireland at a far greater rate during 2020 and 2021 than during pre-pandemic years, The Detail has found.

For example, 180 Eritrean nationals were refused entry to Ireland throughout 2020, with an additional 250 refusals in the first seven months of 2021 alone. That is up from only 25 refusals in 2019. These changes mean that Eritreans have gone from the 23rd most commonly refused nationality to Ireland in 2019, to the top most refused in 2021.

This marked increase in ‘leave to land’ refusals, up to 15 times greater than normal for some nationalities, has occurred despite the general downturn of travel to Ireland. Overall entry refusals subsequently also dropped considerably, by more than 60% between 2019 and 2020. Entry refusals for countries like South Africa, Brazil or the USA, which regularly take top spots in terms of refusals, have dropped considerably during the pandemic.

“These figures are very concerning”, said Nick Henderson, CEO of the Irish Refugee Council. “People from countries which are demonstrably unsafe and in conflict were refused leave to land. Refusals have actually increased for countries such as Syria, Yemen, Afghanistan and Eritrea.”

Mr Henderson said his charity has pointed out to the government the obligation to be proactive in ensuring effective access to the asylum procedure, including during the pandemic. He said that there is a duty to identify persons who may wish to apply for international protection, inform them about the right to apply for asylum and provide them with the information on how to make an application.

He added that people should have access to legal advice and interpreters to ensure they are not sent to countries where they are at risk and have aneffective remedyagainst a refusal of leave to land.

The Department of Justice said that each person who has been refused leave to land is assessed on their own merits taking all relevant information into consideration.

Those who are returned to their country of departure, which in the “vast majority” of cases is to another EU state, are done so in accordance with the law, the department said.

People refused entry can claim asylum and continue to be admitted to the international protection process. The department said it does not keep statistics in respect of those refused entry who subsequently made asylum applications.

The Sunday Times reported earlier this year that out of around 102 Eritrean nationals refused entry to the state between November and February, 81 were allowed to claim asylum.

“The purpose of the checks is to prevent illegal entry to the state and to disrupt activities that are often highly organised involving exploitation of the persons concerned,” a department spokesperson told The Detail.

Immigration Officers at Dublin Airport undertake a variety of checks at e-gates, standard entry booth checks and routine doorstops of aircraft, which are “conducted in a fair, lawful and impartial manner".

A report by the Irish Refugee Council from April stated that while there have been no official reports of ‘push backs’ of people wishing to claim asylum, anecdotal evidence “suggests that some people may be refused leave to land and to enter Ireland even when they have grounds for protection".

“Due to the lack of independent oversight and transparency at airports or ports of entry, it is unclear whether or not a person refused leave to land had protection grounds or had intended to apply for asylum. There is currently no access for independent authorities or NGOs at air or land borders in order to monitor the situation, nor do there appear to be any plans to allow such access in the future,” the report stated.

The Immigration Act 2004 sets out 12 grounds on which an individual can be refused ‘leave to land’, or permission to enter the state. These include not having a valid visa or passport, or intending to take up employment without a valid employment permit, and does not cover people being denied entry on Covid-19 grounds.

People cannot appeal refusals, and charities in Ireland have long raised concerns about the ‘subjective’ nature of decisions and limits to legal representation, with some calling for an independent oversight and monitoring mechanism at Ireland’s main airports.

Ireland’s leave to land process has come under scrutiny in recent years.

In 2019, tougher measures were implemented to prevent Albanian and Georgian nationals from entering the state. Immigration checks were moved to the steps of the plane, preventing these nationalities from making applications for international protection.

The government said at the time that extra checks were imposed following a sharp rise in the numbers of people travelling on false documents. The policy, which has reportedly been largely scaled back, was criticised by a number of migrants’ rights groups as being illegal under Irish and international law.

In 2020, Chilean woman Estefany Alquinta Gonzalez made national headlines when she was held in solitary confinement for 12 days in prison after being refused entry. Ms Gonzalez received an apology from the Minister for Justice, who said changes had been made to “avoid unnecessary immigration detention”.

Figures were requested for how many people were detained following a leave to land refusal in 2020 and 2021, however, neitherthe Department of Justice nor the Gardai provided these.

The department said that arrangements are made to return persons to their country of departure “at the earliest opportunity”, and that they are detained “only after all other possible options have been considered".

Ireland is largely alone in Europe for detaining people in prisons for immigration offences, and was criticised by the Council of Europe’s anti-torture committee last year. A new dedicated immigration facility at Dublin Airport, announced in 2017, is not yet completed.