Spend it like Stormont – a focus on public finances 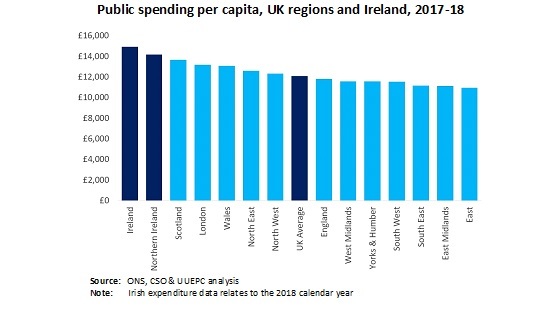 Richard Johnston, Deputy Director of Ulster University Economic Policy Centre, was a consultant on the Spend It Like Stormont programme. Today he writes for The Detail.

“Our public services are under pressure like never before” is the opening line of Below the Radar TV’s documentary for BBC Northern Ireland on public finances in Northern Ireland.

It is the stark reality that is faced every day by public servants as they aim to satisfy the ever-increasing demands from Northern Ireland’s citizens within tightening budget allocations.

The amount that government spends per person in Northern Ireland has been declining in real terms from 2010 as a result of the UK Government’s austerity policy. All of Northern Ireland's public services are delivered for just £14,000 per person. This is the highest of the UK regions and on a par with Ireland, but perhaps not much when you consider that education, health, roads, water, waste, emergency services and more are delivered within this envelope.

Evidence of the increasing demands on public services is provided by Deloitte’s State of the State report. Two thirds of people surveyed said that public services should be extended in Northern Ireland – even if it resulted in higher taxes.

Northern Ireland has an ageing population profile with the number of over 65s more than doubling to almost 500k over a forty-year period (2000-2040). Our enterprises and people are competing for investment, capital and talent in more automated, digitised and internationally connected markets and trade is shifting eastwards.

Brexit has resulted in the creation of two new UK departments, roughly 6,000 government jobs and £1.5bn of expenditure so far, meaning that other policy choices have been delayed or foregone.

These factors combine to create a significant challenge for government to deliver more with less. So - what policies should we change to do our best for society with less funding?

As part of the programme, three groups of people took part in focus group conversations (18 to 30-year-olds, 31 to 59-year-olds and over 60s). They were faced with a range of policy choices that could be made in Northern Ireland.

The catch was that they had to decide how to fund their policy choice by reducing spend elsewhere or by increasing rates. These choices were stark and deliberately provocative, focusing on the issues that are the subject of current debate. As you may expect, certain policy choices were popular with one group and unpopular with another.

Some of key findings from the focus groups were:

What do these findings mean for the future of public services in Northern Ireland and what can we expect as citizens?

Firstly, boosting public sector productivity will be key to delivering upon service demands in Northern Ireland. The improved use of big data, technology, machine learning and artificial intelligence will be part of that solution.

Secondly, demand management will also need to be considered in Northern Ireland, both to smooth out peaks and reduce overall demands and costs.

As for citizens, we can expect that the amount of tax revenues required to fund public services will continue to increase, at least over the medium term. We can also expect the relationship between the state and citizens to evolve, as citizens are asked to take on more responsibility for themselves and their communities. There is room for improvement here as the State of the State report noted that only 34% of those surveyed felt that people should take responsibility for their own lives – which seems remarkably low.

With these changes afoot, we will need to actively engage citizens in taxation and spending policy choices to better understand their specific requirements. An improved evidence base, accurate measurement, quality research and careful policy design based on the individual will be key. How we engage people and help them understand the financial realities will be important and hopefully this programme will help.

It is clear that policy changes are both challenging and necessary. If we are around in 2060, or if we put ourselves in our children’s shoes and look back at the decisions taken in this era, they may be tough, but robust choices focused on long-term benefits will be seen as the best and most ethical options.

Receive The Detail story alerts by email
Spend it like Stormont: an investigation into public spending in Northern Ireland
UN accreditation of NI Human Rights Commission under threat