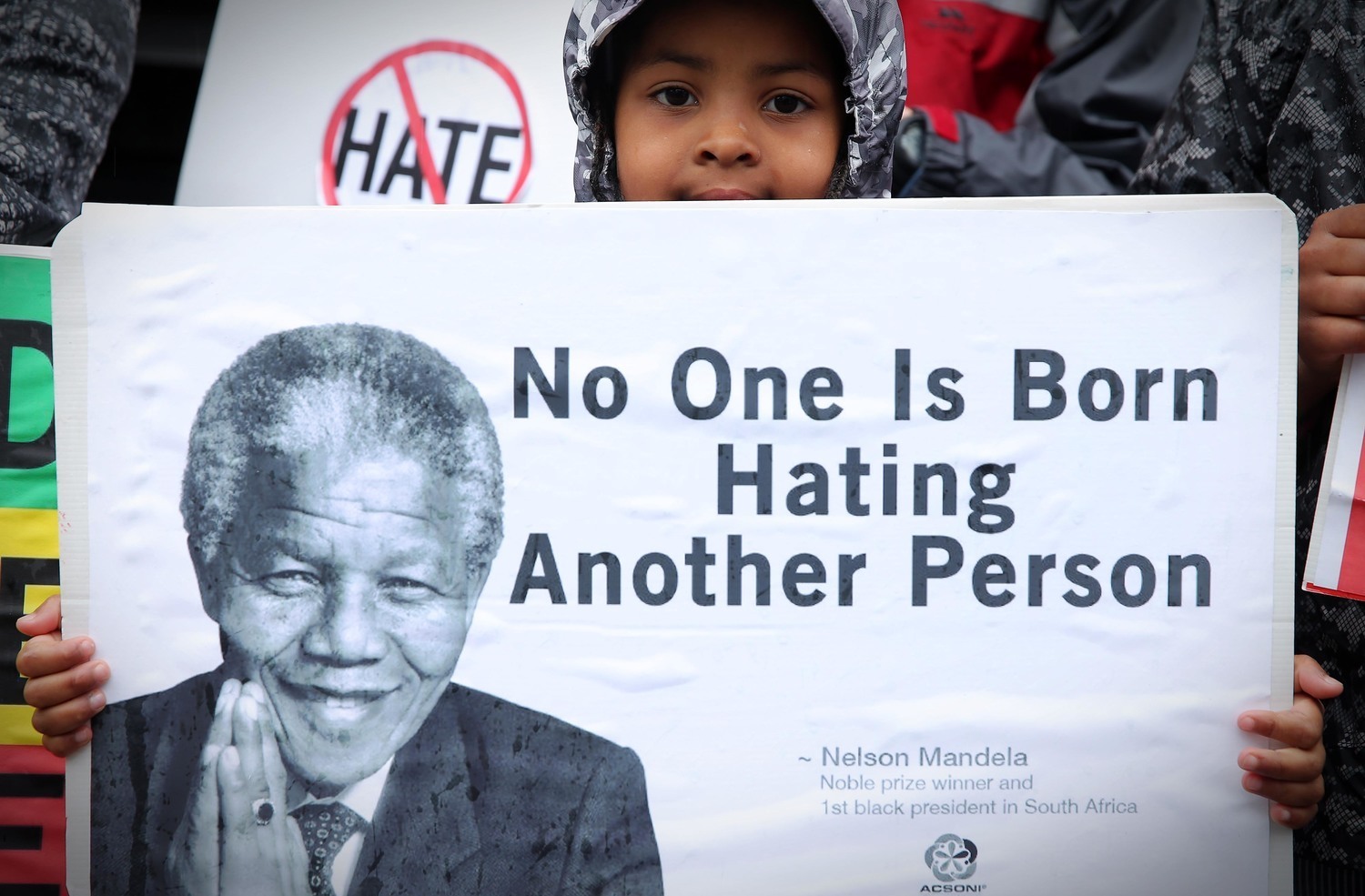 An anti-racism rally in Belfast in 2014

IT is easy to get things wrong in Belfast if you are a new arrival.

During the cold weather this past winter a newly-arrived refugee, who was doing a leaflet drop through the doors to earn some cash, got himself a woolly hat to keep his head warm. He was making the rounds of the Falls Road when one resident warned him that wearing a Glasgow Rangers hat could get him into trouble in this heartland of Celtic supporters.

The warning was well-intentioned and friendly.They aren't always.

In one incident in north Belfast a Polish man who ventured too close to a bar in a hardline loyalist area was assaulted and ended up in hospital with a broken nose and some broken ribs. It was what is called a 'message crime' and it is a message that the Polish community has learned to heed.

In a street close to where that incident took place racist graffiti was painted outside the apartment of another Polish man. Youths gathered regularly in the street outside to shout abuse and one afternoon an axe shattered the window and a petrol bomb was lobbed in. A neighbour, a Nigerian named Joseph* told me what happened next.

“I rushed in. Together we had to put out the flames”. What distressed Joseph even more than the attack was the reaction of neighbours. “They had all come out of their doors to see what was going on, but when I went to them afterwards to ask them to help identify the culprits they all said they hadn’t seen anything.” Though they too may have feared attack.

Mariame’s case is a little bit different. A refugee from Guinea, she has been subjected to racist attacks on her small terrace house in Belfast. “They slashed the tyres on my car, they smash up eggs and smear them on my windows, and they throw bags of excrement over my back wall into my yard.” And, despite all this, Mariame* has no intention of leaving. “My neighbours are very good, and they are helping to guard me. I have found a good home here in Belfast.”

Joseph says the same thing. He too wants to stay. He had been a victim of skinhead violence when he lived in Germany and says that the racist hate crimes in Belfast are no worse than he has experienced elsewhere, and that they have to be seen in the context of a city that is in the main very friendly in its welcome to newcomer communities. He has involved himself in a number of projects which aim to build bridges between the traditional Belfast communities and their new neighbours. “There are so many people working to build positive relations here,” he says. “That’s why I want to stay here, to be part of that.”

The fact that Northern Ireland experiences hate crimes is well-known. They feature regularly in the media, because events can be reported, and the scenes can be photographed: racist graffiti on a gable end, the scorched front door where the burning wheelie bin was left, a bewildered mother cradling a baby and looking back at the house where the attack took place. The long slow processes of relationship-building tend not to receive media coverage because they are undramatic. But they too are real. How then does one assess the overall state of relationships in the new Northern Ireland? Twenty years on from the Good Friday Agreement, is Northern Ireland learning to be at ease with difference?

In south Belfast the shops along the lower Ormeau Road tell their own story: a Dim Sum takeaway, a Turkish barber, an Indian supermarket, a Russian travel agency, and a range of Asian fast food outlets. In the narrow streets that lead off the main thoroughfare the walls carry reminders of life before the Good Friday Agreement: there is a plaque at the bookie’s shop where five Catholics were killed in a sectarian shooting, and a few streets up a faded mural that dates from the days when Catholic protestors held sit-down demonstrations on the main road to block Orange marches. Who knows what the Asians, Chinese, Africans and Roma make of the history of this area they now consider home? The one certainty is that the new communities are here to stay, and that the palette now has more colours than the traditional orange and green.

No-one expected this to happen. When the political parties and the two governments began inching towards a settlement in the 1990s Ireland, north and south, was as close to being a uni-ethnic society as was possible in western Europe. It was only in 1997, one year before the Good Friday/Belfast Agreement was signed, that the government in Westminster introduced legislation to outlaw racial discrimination in Northern Ireland. Up until then it had simply not been seen as an issue. The Agreement did not of itself mark any significant difference in inward immigration. The real catalyst came in 2004 when the UK, Ireland and Sweden decided to open their labour markets to the eight accession countries of central and eastern Europe (the A8). Since then, apart from a dip during the recession, Northern Ireland’s economy has been significantly transformed by inward migration.

Figures issued by the Department for the Economy (DfE) in March 2018 show that migrant workers account for almost all the economic growth between 2008 and 2016. The contrast with the local workforce is stark. While the number of UK-born people in employment fell by 10,000 in that period the number of EU immigrants in employment rose by 40,000. Using employment data, the DfE estimates that at the end of 2016 there were 117,000 people resident in Northern Ireland who were migrants from an EU country (the figure includes 38,000 from the Republic of Ireland). The two major migrant groups are Polish and Lithuanian with an estimated 25,000 each. The DfE report makes a very clear assessment of the economic value of this intake: "It is clear that between 2008 and 2016, employment recovery and growth in Northern Ireland was driven, particularly since 2014, by migrants born in the EU."

In a quite different category are refugees and asylum-seekers. One indication of numbers comes from the Housing Executive’s annual equality report which showed 720 refugees and asylum-seekers in sheltered accommodation. In a category of their own are the Syrians who have been resettled in Northern Ireland and have come as part of the Syrian Vulnerable Persons Relocation Scheme, and who currently number 932 in total in Northern Ireland.

No matter how benign the environment, the refugee will always feel displaced and it is perhaps easier to feel displaced in Northern Ireland than it is in most places. Where are we? Is this Britain or are we in Ireland? Israel Equaogie, a volunteer with Africa House, says this is the most common question he faces. For newcomers everything about Northern Ireland is bewildering. If they have spent time in England, he says, Belfast doesn’t feel the same. The bank notes don’t have the Queen’s head on them and the array of local iconography used by the Northern Ireland banks is baffling. Maybe this is Irish money? But how come there are union jacks everywhere? And, once it is discovered that the union jacks don’t actually fly everywhere there is another whole level of complexity to contend with.

Increases in the numbers of ethnic minorities would appear to have led to a reduction in prejudice, not an increase. The calculus for this is a complex one, as was shown in the Brexit referendum where concerns about immigration tended to peak in areas that actually experienced very little by way of population change, though some may have experienced such changes rapidly over a narrow period. But recent survey evidence across Northern Ireland is encouraging. Two reports point to a liberalisation of attitudes. In January this year the Equality Commission published the latest results of a survey it undertakes every five years into prejudice and tolerance. Five years ago 16% of those surveyed felt that ethnic minorities were treated unfairly; that has dropped to 7%. And, when asked to describe their own attitudes, 77% described their feelings towards ethnic minorities as ‘positive’.

Changes in attitudes have also been tracked by the NI Life and Times Survey (NILT), and in May 2017 it published a review entitled Racism and Intolerance Towards Minority Ethnic Groups. This showed that the percentage of respondents who have friends from different ethnic or nationality backgrounds increased steadily in the 2006- 2015 period. For example, the proportion of respondents having Polish friends doubled between 2006 and 2014 (from 11% to 22%), and rose again to 27 per cent in 2015.

But it’s not all good news. Both surveys also reveal a layer of self-admitted prejudice. In the Equality Commission survey 10% characterised their own attitudes as `negative’ and a further 14% located themselves in the non-committal ‘neither positive nor negative’ part of the spectrum. In the NILT survey a total of 28% of people said that they were prejudiced against people from minority ethnic communities, and while none of the respondents admitted to criminal behaviour, 11% of respondents admitted that they had called someone names to their face - which, if reported, would constitute a racially-motivated incident.

Under the terms of the Criminal Justice (No 2) Order of 2004, words and gestures can be recorded as hate incidents. The PSNI statistics for the period since then show a fluctuation in the patterns of hate crimes and hate incidents. A dip in the period between 2009/10 and 2011/12 was followed by a sharp increase each year between 2011/12 and 2014/15 (the highest recorded in the series). Encouragement can be taken from the fact that there has been a significant drop in both over the past three years. The year 2016/17 saw 660 race hate crimes recorded, compared to 853 in 2015/16 and 920 in 2014/15. This trend seems to be in line with the survey data, suggesting that racist attitudes and behaviours are both in retreat. The new evidence might finally put paid to the idea that Northern Ireland is the ‘race hate capital of Europe’, a story that is recycled from time to time, but which never had any empirical foundation.

All statistics on hate crime must of course be treated with care. This is a seriously under-reported crime, and the police themselves say the figures may be no more than the iceberg tip. That said, taken over time, they can point to distinct trends. In England, the trend is up; in Northern Ireland it is down. Statistical patterns may prove scant comfort for the refugee who hears a thumping at the door in the night, but there are grounds to hope that in the longer term minorities are moving in from the margins. If that were to happen Northern Ireland as a society would go through a profound culture change.

(*The names of some interviewees were changed for their protection.)

Receive The Detail story alerts by email
Policing in Northern Ireland: how the past threatens the future
Lyra McKee murder and Loughinisland journalists’ arrests place UK below Israel in new global freedom of expression index