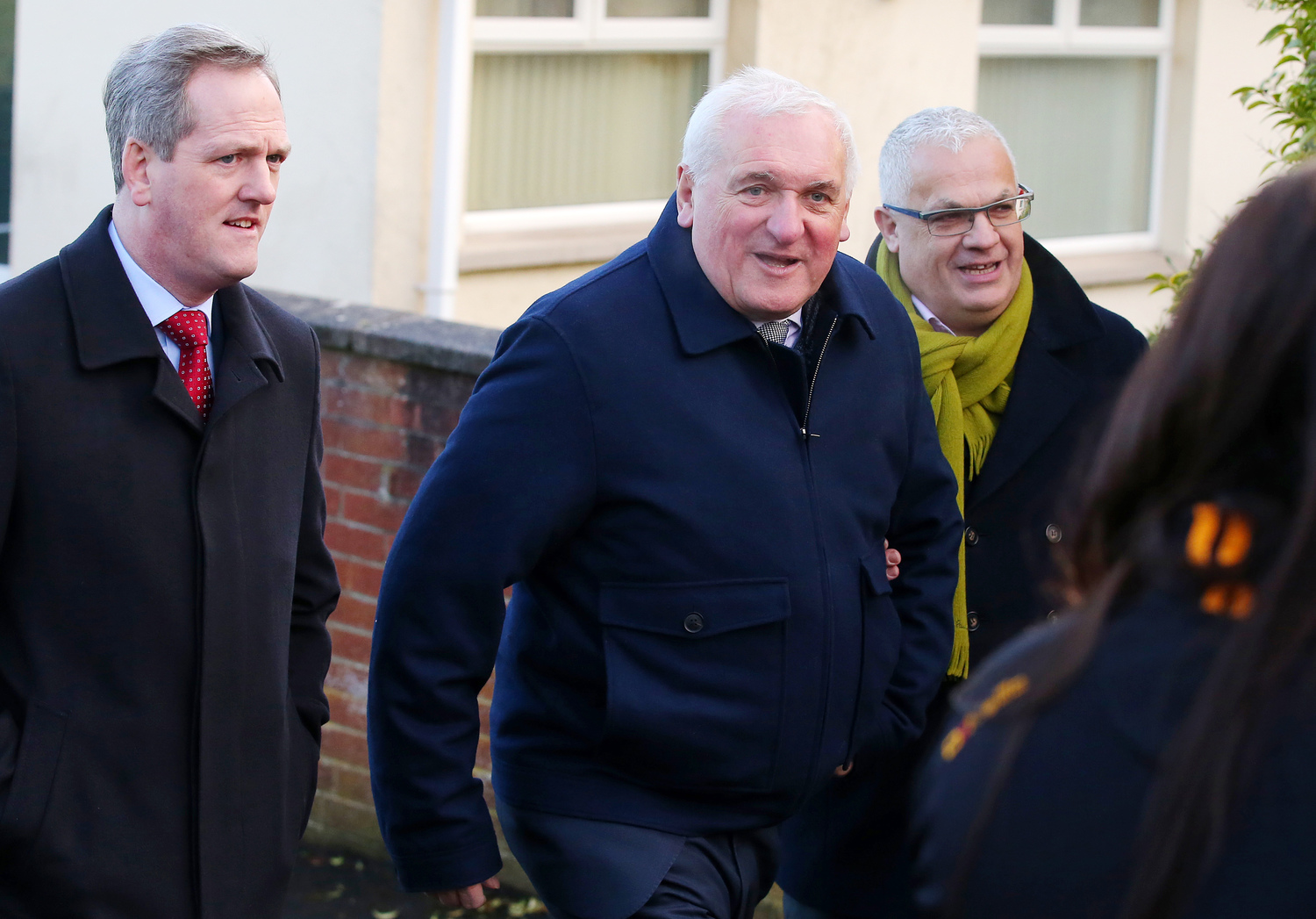 Bertie Ahern at the funeral of Seamus Mallon. Photo by by Jonathan Porter, Press Eye.

FORMER Taoiseach Bertie Ahern believes that there will be a border poll within the next eight years, before the 30th anniversary of the Good Friday Agreement (GFA).

In an interview with The Detail, Mr Ahern, who was one of the key architects of the GFA in 1998, lays down the conditions that he believes must be met before a border poll should be called and he outlines his vision for a "new Ireland".

Recalling the GFA negotiations, Mr Ahern commented that the border poll was not a contentious subject at the time.

He said: "The big issues were the release of prisoners and reform of the police... and of course the whole equality agenda and change in the criminal justice system."

Mr Ahern stated that some signatories of the agreement expected that a border poll would be called within 10 years of the GFA.

But he said they would never have envisaged the difficulties that followed the 1998 vote.

Mr Ahern added: "I would have been far more enthusiastic than I am now because I never would have believed that the institutions would have come down over Stormontgate and then cash for ash."

He described Brexit as a "bombshell" that could never have been predicted at the time of the GFA, saying: "When we were negotiating nobody, not the best of us or the maddest of us ever mentioned that the UK could pull out (of Europe)."

Mr Ahern stated that, while Brexit is a definite threat to the GFA, it is ultimately a situation that can be managed.

Mr Ahern believes that the stop start nature of the Northern Ireland Assembly has prevented a border poll being called before now.

He said: "Unless you have the institutions working for a prolonged period in a sustainable way, with no breakdowns, well having a border poll would be the last thing you would do."

The former Taoiseach outlined the two conditions he believes would need to be met before a border poll should be called.

Firstly, that the institutions would have to be seen to be working sustainably for a long period of time and secondly that a significant analysis of how a united Ireland would work would need to be undertaken.

He stated that any vote in advance of such a study would be premature and "will be defeated out of sight", but he added that "if sustained effort was put into that work by relevant experts you could have a very clear position on that (a united Ireland) in five years time".

However, the former Taoiseach is not in favour of a Citizens' Assembly being formed to deliberate on the issues involved, believing instead that a collective group from the academic world would be the most appropriate forum to carry out such research.

Asked what he would hope for a united Ireland to look like Mr Ahern said that he would like to see "a new Ireland, one that is based on consent and one where the necessary compromises are made to make everyone as satisfied as you can make them".

He said that this consensus wouldn't be easy to achieve but that there would have to be an arrangement made that would be satisfactory to all sides.

Mr Ahern pointed to his recent experience of conflict resolution in Papua New Guinea, a country made up of 1,000 clans and several hundred dialects, where they "still managed to pull everyone together and have a successful referendum".

Mr Ahern pointed out that questions would need be addressed before building any new political system, such as how government departments would be integrated and if Northern Ireland would still have an assembly of its own.

When asked about his own preferred governance arrangement for a new Ireland he said :"If north/south bodies were working the way I'd like to see them working and the way they were working back in the early noughties I think that would be ok (to have an assembly in Northern Ireland).

"Some kind of a regional arrangement could work. I think there would be a lot of security in that for northern unionists."

The ex-Fianna Fáil leader maintains that voters in the south would be prepared to make "significant compromises" to accommodate a unionist minority within a united Ireland.

"I think the people in the south want to have an all-island peaceful society based on consent," he said.

Mr Ahern recalled that "for many, many years I was told within and outside my own party that Articles 2 and 3 (of the Constitution of Ireland) could never, never go and then people voted for it".

He believes the main stumbling block to a united Ireland is the structure of Northern Ireland's economy, and its over reliance on the public sector.

Mr Ahern said: "One way or another whether we have a new Ireland, a united Ireland or we stay divided as the way we are, Northern Ireland has a problem becoming more of a private sector economy than it is today.

"I mean you cannot continue on with anywhere being propped up to the extent that they are... nobody is going to pay. That structure has to change."

Mr Ahern went on to praise the quality of the business and farming communities in Northern Ireland and to outline the favourable conditions that he believes exist for industrial development in the north.

Referring to the strong tradition of the ship building and linen industries, Mr Ahern said that there were "plenty of industries" that could be built up. He also cited the low cost base as an advantage that the north has over the south and highlighted that Northern Ireland is no longer losing its graduates to the same extent it did during the Troubles and that many have returned home since the cessation of violence.

Mr Ahern said: "If you had a few big industries up there and they were sucking up their graduates well that would change and what's stopping that is the sustainability of the institutions.

"Business people say yeah we would consider investing in Northern Ireland but where do we find the Minister of Finance? If he hasn't been working.. that's the problem.

"It seems to me that there's a governance issue that needs to be dealt with. I mean we've a great civil service here (in the south) and whoever is in power and whatever happens with the election there'll be a seamless change by the civil service.

"That comes from what some people like to call bureaucrats but what I'd like to call just good bloody managers, and our senior civil servants particularly. I mean they come up through the system maybe 20/30 years and they're good and I think they need that in the north.

He pointed out that it is not necessarily a politician's forte to be dealing with the vast administrative duties and paperwork attached to a new ministerial brief and that a few really good civil servants in each department, along with a few in central positions, is what he believes to be the key to a successful administration.

When he was asked if he thought he would live to see his vision for a new Ireland he replied: "Yes I think so. It just depends on me staying fit and healthy and not going to as many funerals as I did in 2019."

Referring to the "many great friends" he had lost recently, such as Seamus Mallon, David Ervine, Mo Mowlam and Martin McGuinness, Mr Ahern said: "We've lost so many great people."