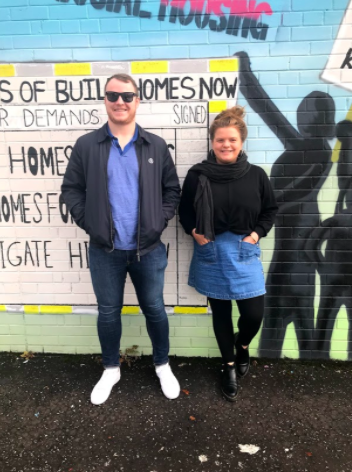 Photo of The Detail's Rory Winters and PPR's Elfie Seymour, standing in front of PPR's mural in west Belfast.

THE Bertha Foundation is a philanthropic organisation which supports activists, journalists and lawyers from all over the world, to ‘bring about social and economic justice, and human rights for all’.

Bertha provided funding to The Detail, which enabled us to produce a series of articles, relating to housing and land rights in Belfast.

Our ‘Bertha Challenge’ was carried out in partnership with Participation and the Practice of Rights (PPR), an activist-led organisation based in Belfast which is focused on human rights causes. The project has now come to a close.

The Detail’s investigative reporting focused on a range of issues relating to some of PPR’s housing campaign work.

She told The Detail: “Bertha gave us the time and focus to build local and international alliances for the Build Homes Now campaign and develop real solutions.”

Ms Seymour also said PPR’s partnership with The Detail was of “immense value” to her organisation “as it enabled us to work with a journalist over a long period of time who was able to give the issues the time and respect they needed”.

The Department for Communities (DfC) is responsible for housing in Northern Ireland. The Detail requested an interview with the Communities Minister, Sinn Féin’s Deirdre Hargey, about our Bertha Challenge – but this request was not facilitated by her department.

Minister Hargey did, however, provide a statement to us. She told The Detail: “Housing stress is increasing here, despite investment and measures to improve housing supply and standards – our current system is broken.

“Transformative change is needed to address the huge challenges we face in tackling our growing housing waiting lists and the increasing number of people and families most in need of a home.

“The delivery of this much needed change is front and centre of my housing programme.” 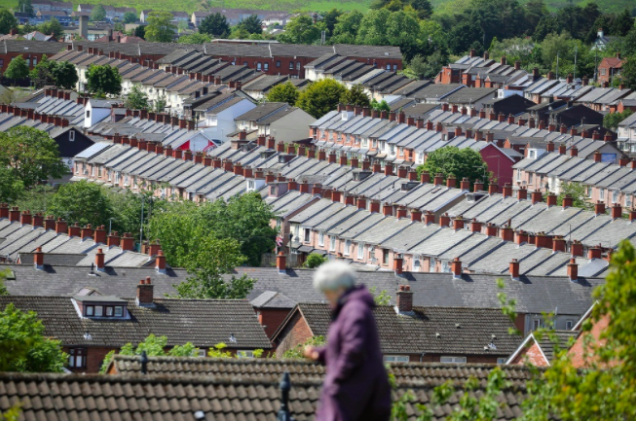 Minister Hargey added that she “will ensure” that the Northern Ireland Housing Executive (NIHE) “can build more homes where they are needed and provide essential maintenance to the 85,000 homes they currently manage”, and that she wants “effective and fair” allocations of social housing.

The minister said: “I intend to reintroduce ring-fencing, which means money will be protected to prioritise areas where there is highest housing need, such as north Belfast, west Belfast, Derry City and other areas.”

She also referenced the ‘right to buy’ policy introduced by Margaret Thatcher’s Government in the 1980s.

Minister Hargey said: “This has undoubtedly placed huge, additional pressure onto a growing social housing waiting list and particularly for those most in need. A public consultation on ending the right to buy scheme will be introduced.

“To those tenants who have already applied to buy their NIHE home, I will ensure their applications are considered before the ‘house sales scheme’ ends.”

Minister Hargey also said that her housing strategy “will provide a firm foundation for the delivery of a wide range of positive social and economic outcomes, and help us move to the point that every household has access to a good-quality, affordable and sustainable home that is appropriate to its needs”.

She added: “Equality and human rights are at the heart of my approach, you can’t get more basic than the right to a home.”

Calling Minister Hargey’s plans “the most ambitious housing reform programme since the formation of the NIHE", PPR’s Elfie Seymour said: “It’s difficult to measure the impact of our Bertha Challenge.

“However, it’s positive to see a government minister commit to these progressive plans in the same year that The Detail and PPR put a forensic lens on the housing policies which have failed so many in recent years.” 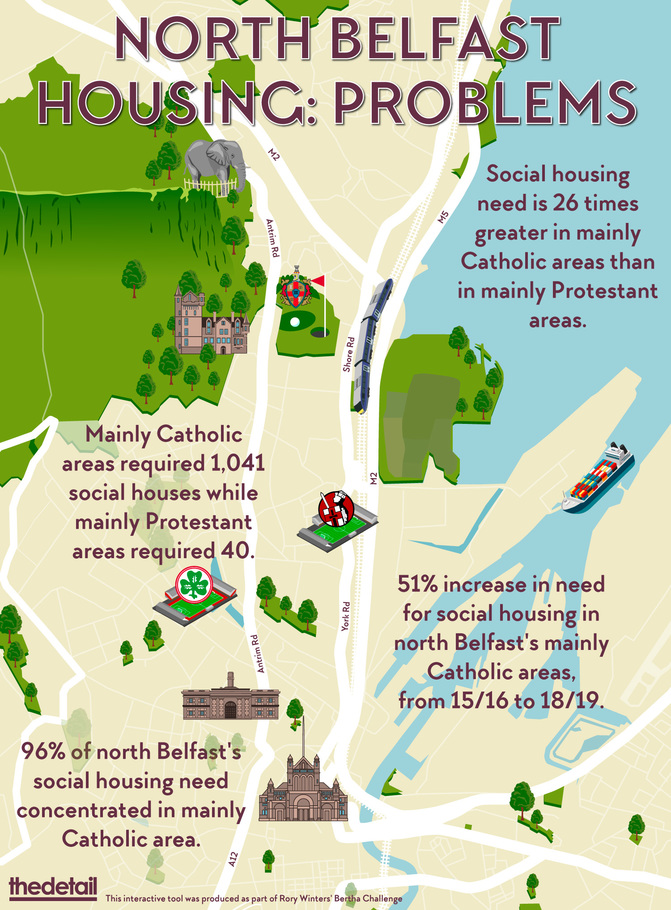 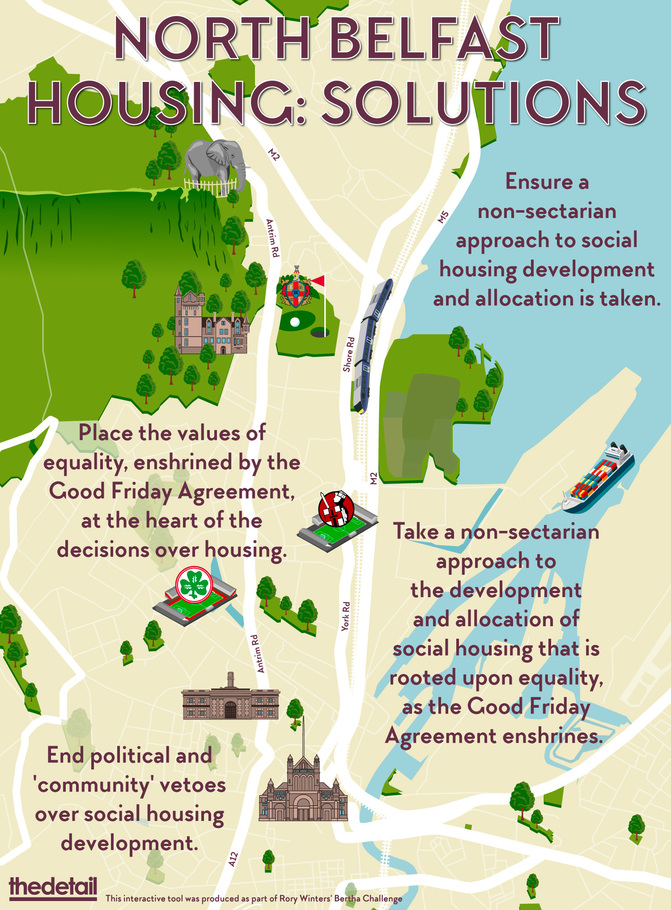 The first report of our Bertha Challenge highlighted how, in 2018/19, 96% of the requirement for social housing in north Belfast was concentrated in the area’s predominantly Catholic/nationalist/republican (CNR) neighbourhoods – as opposed to its mainly Protestant/unionist/loyalist (PUL) neighbourhoods.

We also revealed how the need for social housing in mainly CNR areas of north Belfast was 26 times greater than in predominantly PUL areas.

Minister Hargey previously told The Detail how she was “very concerned by the housing inequalities” our report exposed.

Ms Seymour called these comments “ground-breaking” as they represented “the first time since the Good Friday Agreement” that any Stormont minister recognised “religious inequality in housing provision” anywhere in Northern Ireland.

Our report also led to Minister Hargey contacting the NIHE over its approach to record-keeping after we uncovered a disproportionate number of meetings, between DUP north Belfast political representatives and top NIHE officials, which had no official minutes or agendas. 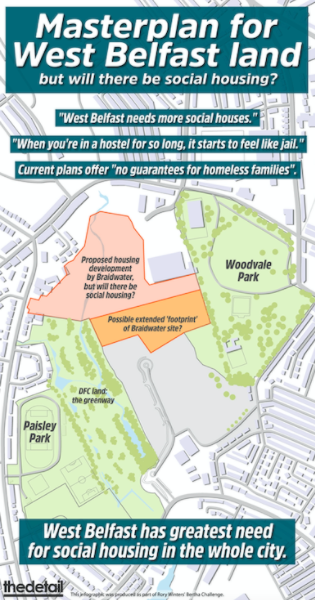 Our focus then shifted onto west Belfast and the DfC-owned Mackie’s site.

Elfie Seymour told The Detail: “Mackie’s is publicly-owned land, controlled by the government department responsible for social housing, in the middle of the area of highest housing demand in the state.

“There could not be an easier option if decision makers are serious about tackling the housing crisis.”

This report and video tied in the actions of the Yes Men, political stunt activists, who came to Belfast and impersonated individuals representing the interests of developers called Castlebrooke Investments and purposefully made false statements on the group’s behalf.

Later, we reported how a Belfast City Council ‘masterplan’, showing proposals for a major piece of land in west Belfast – including the Mackie’s site – shows no evidence of plans for the development of social housing.

Minister Hargey’s recent response to The Detail did not mention Mackie’s.

Ms Seymour said: “Now is the time for those in power to deliver on the ambitious statements of both Minister Ní Chuilín and Minister Hargey. If we're serious about addressing housing inequality and homelessness in west and north Belfast, this has to start at Mackie’s.”

Another report looked at the lives of families living in a west Belfast hostel and how problems in Northern Ireland’s system of housing provision, which predated the Covid-19 pandemic, became further exposed by the public health crisis.

One woman, whose son has a complex heart disease, told The Detail: "We’re stuck. Our windows are jammed shut and we had to try and open one by force the other day. It’s difficult. Sometimes you feel suffocated being in here."

Ms Seymour told The Detail: "The only solution is to build more social homes. To do this, urban planning and the development of land across the city can no longer be under the influence of property developers looking to make a quick profit.

“All levels of the state – Belfast City Council, Housing Executive and Stormont departments – need to use their powers to eliminate homelessness in our society.”

We also reported on the story of a Polish woman, who lived in the Village area of south Belfast, who questioned how the police handled a threat to burn down her home, while another of our reports focused on racist intimidation, in the same area, and looked at the story of Sahra Mahamuud.

Originally from Somalia, Ms Mahamuud moved to Europe when she was a 14-year-old, leaving behind a country in turmoil in search of a more secure existence. Ms Mahamuud told The Detail of her despair at the racism her family experienced living in the Village.

She said: “My son was beaten up on the bus. My children were chased from the park with kids telling them to go back where they came from.”

A house which the family were due to move into was sprayed with graffiti saying ‘locals only’ just before they were due to begin living there and the police decided it was, therefore, not safe for them to do so.

Our report also contained analysis of the influence of loyalist paramilitaries in intimidating people from housing in the area where Ms Mahamuud lived.

Despite this, the statement which Minister Hargey recently provided to The Detail did not include any reference to intimidation, racism or the influence of paramilitaries over our society’s approach to housing.