One in five children live below the poverty line 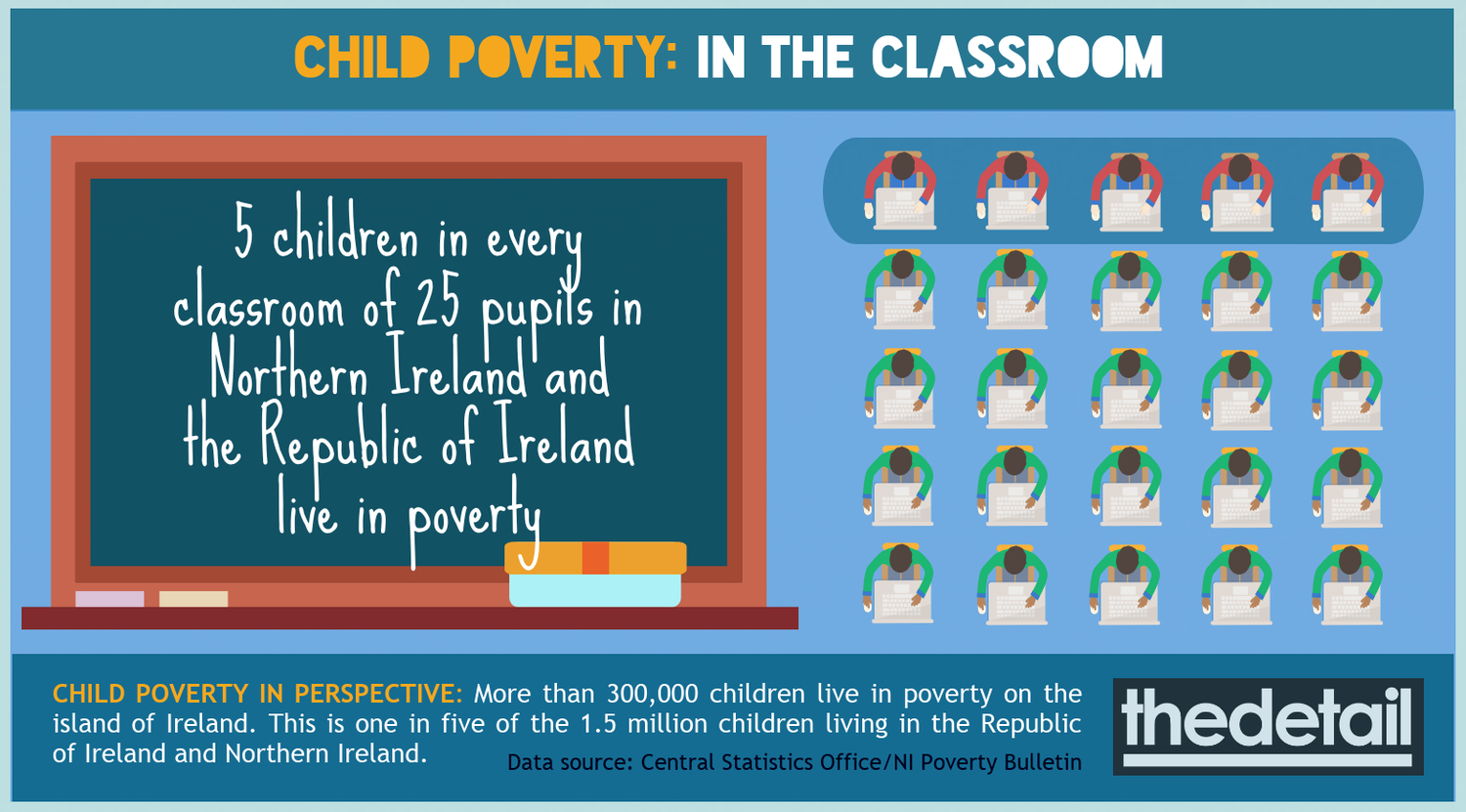 MORE than 300,000 children on the island of Ireland are living below the poverty line - yet pledges by respective governments north and south of the border to tackle the issue are either falling behind or unlikely to be realised.

As part of a joint project on child poverty with the Irish Times, we have examined new figures published this week which show that child poverty rates in Northern Ireland are on par with official estimates for the Republic of Ireland, with children in both jurisdictions at greater risk of experiencing poverty than any other age group or the general population.

Official estimates published by the Department for Communities show that 19% of all children in Northern Ireland (aged 0-16 years and including dependent children from 16-19 years) were living below the poverty line in 2017/18 - that is in households where the income is less than 60% of the UK average.

In the Republic of Ireland official estimates indicate that 18.4% of all children (aged 0-17 years) were living in households with an income below 60% of the national average in 2017.

The poverty threshold in the Republic of Ireland for a couple with two children stood at €29,049 in 2017.

In real terms these rates put the number of children living in poverty at 85,000 in Northern Ireland and 220,000 in the Republic of Ireland.

Throughout today's coverage we refer to any child living in a household below 60% of the average income as living in poverty. 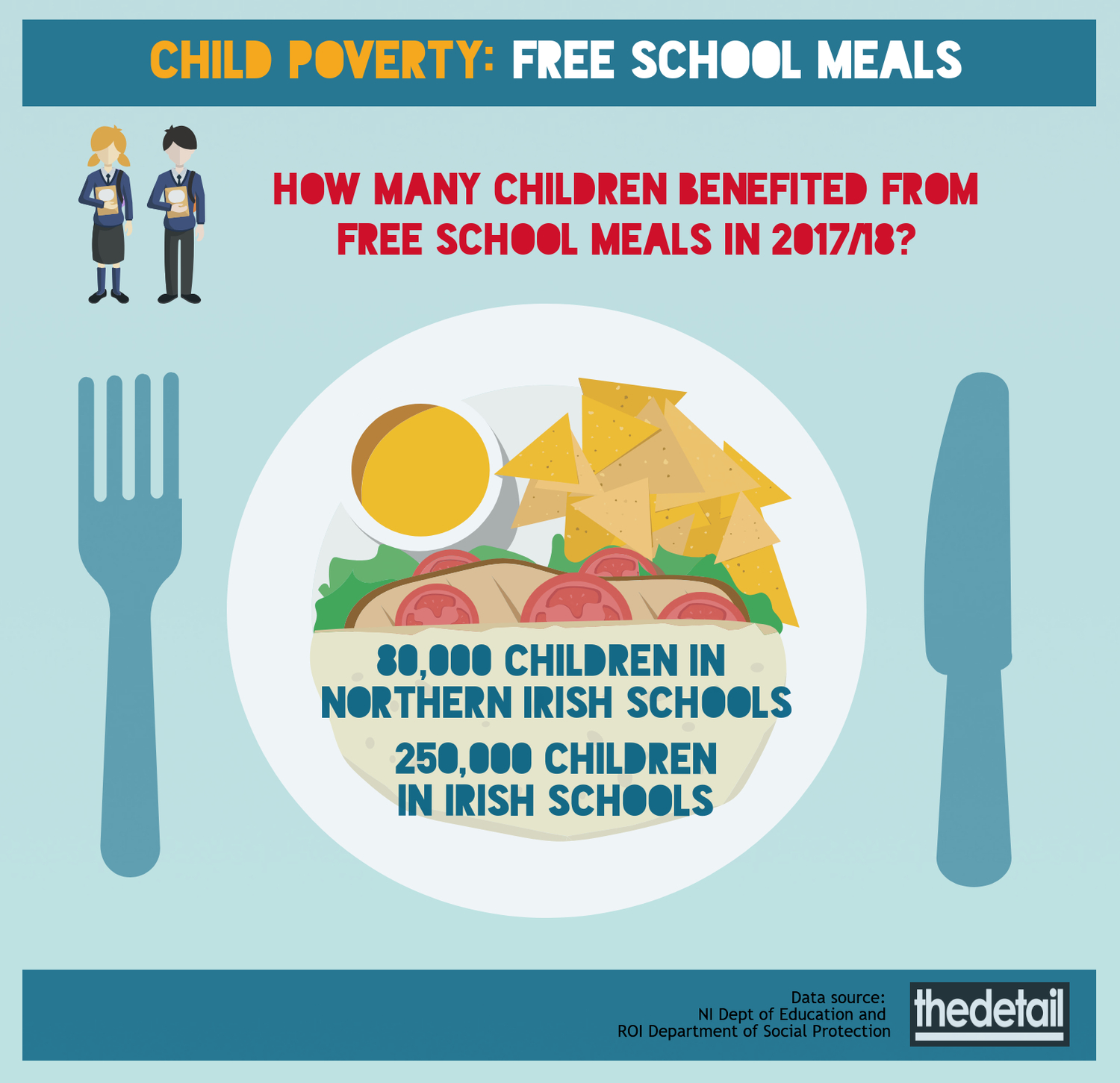 The latest data for Northern Ireland further reveals a three percentage point fall in child poverty since 2016/17 (22%), bringing the rate to its lowest on record since 2002/03.

The new record low of 19% for Northern Ireland compares favourably with the latest UK child poverty rate, which increased to 22% in 2017/18.

The gains made in Northern Ireland in 2017/18, however, could be undone in 2020 when welfare mitigation measures and funding to protect low income households run out.

More long-term estimates based on low income households also paint a more nuanced picture and reveal that Northern Ireland has a slightly higher child poverty rate compared to the rest of the UK.

Average child poverty rates over the period between 2015/16 and 2017/18 show that 21% of all children in Northern Ireland were living in poverty during this period compared to 20% in England, Scotland and Wales.

Comparison with European poverty indicators further shows that the Republic of Ireland and the UK have a higher proportion of children living in poverty or severe deprivation.

The EU poverty indicator not only looks at those living below income thresholds but also those living in low work households, and those unable to afford basic items like keeping the home heated.

Eurostat data estimates that 313,000 children, or one in four children in the Republic of Ireland were living in poverty or experiencing severe deprivation in 2017.

This follows a gradual decline in the number of Irish children experiencing poverty and social exclusion during the recession when numbers exceeded 400,000 children from 2010 onwards.

EU data on severe material deprivation further shows that in 2017 an estimated 85,000 children in the Republic of Ireland and close to 800,000 children across the UK lived in homes that could not afford at least four out of nine basic items, such as eating meat or fish every second day or paying mortgage, rent or utility bills.

A more regional breakdown found the North East of England had the highest child poverty rate at 22.2% in 2016.

To identify where child poverty is being felt most The Detail analysed deprivation data north and south of the border to find that Belfast and Limerick cities ranked among the most deprived areas.

Official data on deprivation levels in the Republic of Ireland (2016) and Northern Ireland (2017) are not directly comparable but taken separately highlight where deprivation is greatest on the island of Ireland.

Deprivation levels are based on a range of indicators measuring levels of unemployment, educational attainment, uptake of social housing, as well as household size and other factors.

High levels of deprivation were also evident in Derry and west Belfast and in Waterford city and County Donegal.

The following profiles draw on available data to provide a snapshot of the level of deprivation and poverty facing children living in north Belfast and Limerick City. 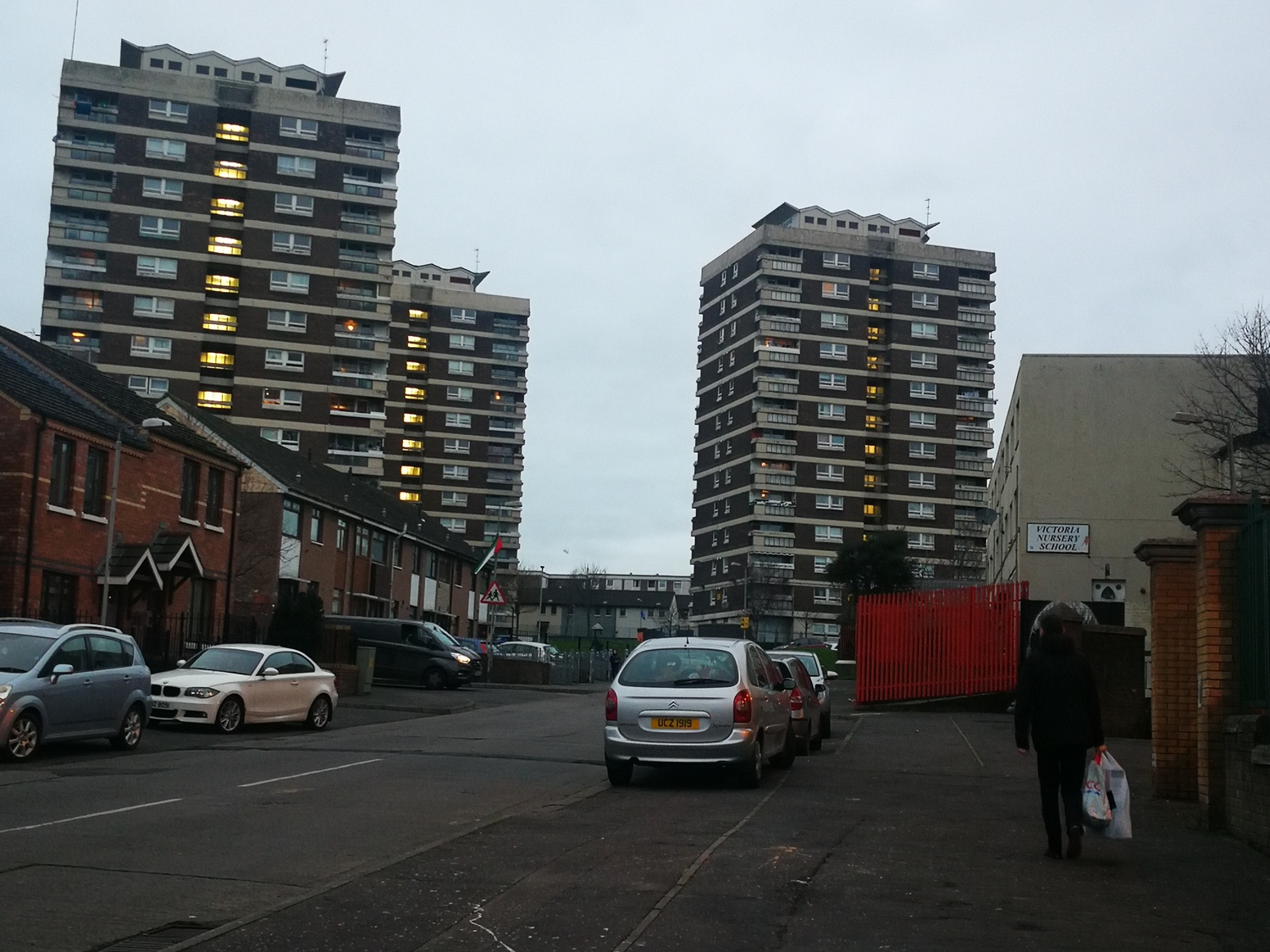 Some parts of north Belfast had child poverty rates almost three times the average for Northern Ireland (21.3%) in 2016, according to UK government data on children living in low income families.

A detailed geographical breakdown for Northern Ireland found that pockets of north Belfast (super output areas) had some of the highest child poverty rates across the jurisdiction, such as Ardoyne3 (60.9%) and Waterworks1 (59.4%), where poverty rates were almost three times the NI average.

The top 20 super output areas in north Belfast had child poverty rates that were twice the NI average – all were above 43%.

An analysis of other data sources found the following in north Belfast:

Pockets of Limerick city are ranked among the most deprived areas in the Republic of Ireland, according to the 2016 Pobal deprivation index.

The John’s A area of the city was ranked as ‘extremely disadvantaged’ and the most deprived area in the entire country.

The deprivation index shows that the electoral division, which had a population of 759 in 2016, had high unemployment rates at 69% among men and 40% among women.

In addition to a high proportion of lone parents (77%) almost half of the population had a primary education only and just 2% had a third level education.

Other smaller pockets of Limerick city ranked as ‘very disadvantaged’ included Galvone B, Glentworth C, Ballynanty, and Kileely A. These areas had unemployment rates ranging between 33% and 48% and lone parent rates between 53% and 69%. 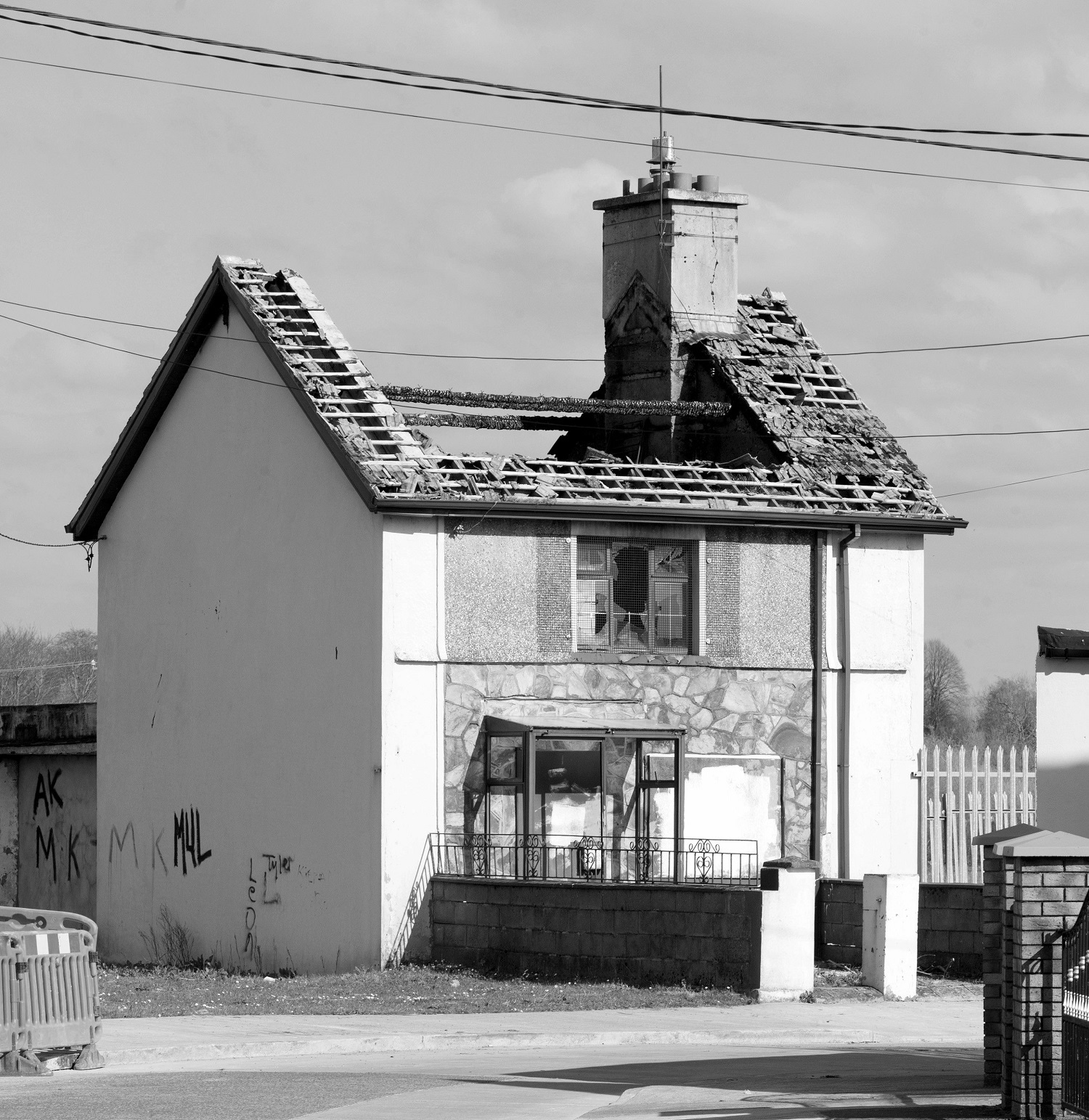 St Mary's Park, Limerick. One of the many derelict houses. Photograph by Liam Burke/Press 22 for the Irish Times

As part of this project the Irish Times spoke to families on the ground in north Belfast and Limerick City to capture the personal testimonies of those living at the coalface of poverty in 2019.

Click here to read about their experiences and whether state agencies and government policy is living up to promises made to tackle child poverty and provide equal opportunities for all children.

The Detail can further reveal that pledges made by respective governments north and south to tackle child poverty are falling behind or unlikely to be realised.

The Irish government has committed to reducing the number of children living in consistent poverty (combination of relative poverty and material deprivation) to 37,000 by 2020.

The Department of Social Protection said consistent poverty rates for children fell by two percentage points in 2017 and that the full benefit of the growing economy and recent social welfare increases have yet to be seen.

A spokesperson for the Department said: “Increased supports along with increasing employment rates suggest that we can expect further decreases in the poverty rates once the 2018 figures become available.

“However, the challenge Ireland faces in trying to achieve the child poverty target needs some perspective: at the height of the economic boom in 2008, when the consistent poverty rate for children was at its lowest, there were 68,000 children in consistent poverty. So, in order to meet the target, Ireland will have to be more than twice as effective as our best ever performance to date.”

In Northern Ireland the continued absence of a functioning Assembly and the potential for economic Brexit shocks could compound the challenges faced by the 85,000 children already living in poverty.

Several key policies, strategies, and decisions have been stalled, mothballed, or left in limbo since Stormont collapsed 823 days ago.

Strategies to tackle child poverty, social exclusion, and deprivation have not and cannot be progressed without an executive or ministers in place.

The political vacuum has also eliminated any prospect of a new social strategy to tackle social exclusion and deprivation – something that Stormont was required to deliver following a 2015 High Court judgement.

A spokesperson said: “The Department for Communities carried out preliminary work on the preparation of a new Social Strategy to tackle poverty, social exclusion and patterns of deprivation. However, as this would require an Executive decision to take this work forward to consultation cannot be taken forward.”

Meanwhile families relying on welfare payments could also face a cliff-edge scenario once mitigation funding and payments, agreed under the 2015 Fresh Start Agreement, run out in March next year.

This mitigation funding was put in place to protect families and individuals on low income or reliant on state benefits from recently introduced welfare changes across the UK.

The Department for Communities said an Executive and Ministers will also be required to take decisions on future welfare mitigation measures from April 2020 onwards.

Click here to return to the main story on child poverty on the island of Ireland.