“Dying is dying, it doesn’t matter where you live, it’s universal and Ireland is one island.” 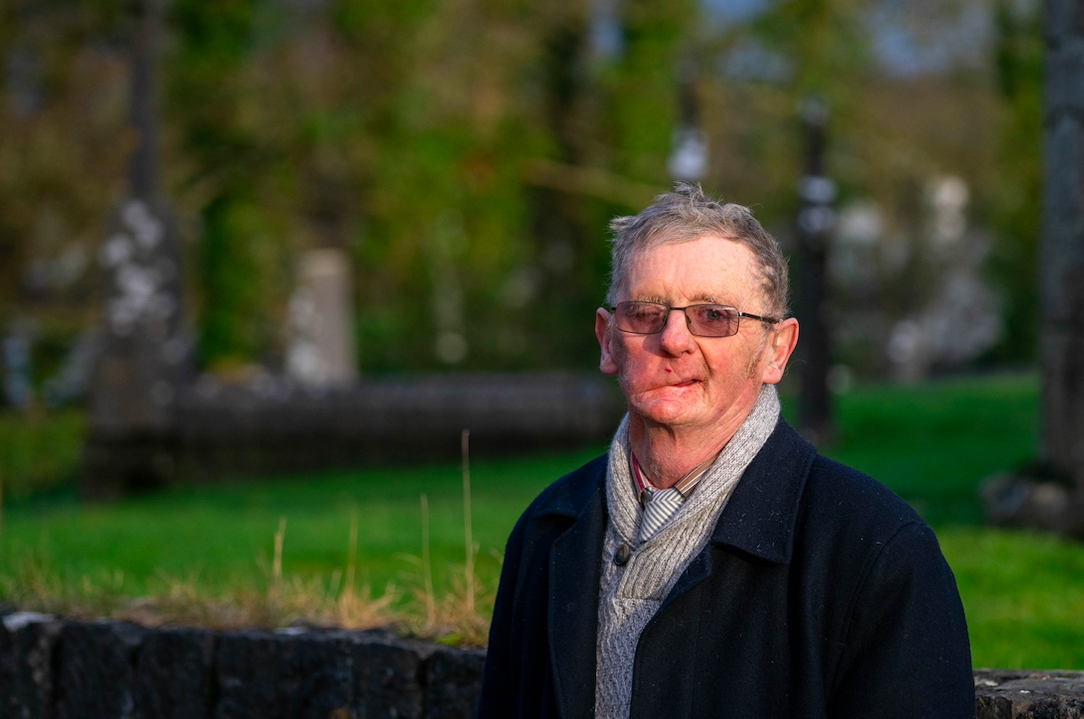 Almost 25-years after the Good Friday Agreement, relationships north-south and east-west are evolving and changing. In this context, what are the issues that are relevant and to be considered as we think of our future? The Detail is publishing a series of articles which will explore daily cross-Border activity on the island of Ireland. The former editor of the Impartial Reporter newspaper, Denzil McDaniel, introduces the series while below, in the first of our stories, Rory Winters examines current all-island health services through the work of the All-Ireland Institute of Hospice and Palliative Care.

IT has been about a decade since 62-year-old County Mayo man, John Joyce, was diagnosed with cancer.

He had an operation and then returned for treatment six months later when he underwent a further operation and 36 radiotherapy sessions. While he felt ok for five or six months, Mr Joyce then found out he had a tumour in his head.

He subsequently had a further 36 radiotherapy sessions, but they didn’t improve his condition much. Mr Joyce was then put on chemotherapy which affected his heart.

“My heart’s pumping power went down to 15/16%,” Mr Joyce told The Detail. The treatment also affected his face. He’s blind in one eye and deaf in one ear.

At that point, which was almost five years ago, Mr Joyce was told that the tumour was inoperable and incurable. That’s when he began palliative care which he “wouldn’t be here without”.

Mr Joyce said: “I remember distinctly, when I was an inpatient in Galway and was on chemo and radiotherapy at the time for about seven months, I can see it in my mind’s eye – the three ladies silhouetted in the window and one of them saying they were from the palliative care team – I thought ‘ok, I’m dead’.

“That’s the automatic reaction when you hear ‘palliative care’, I thought I was gone. When I left the hospital, the palliative care people followed me. First to a nursing home for four weeks. Then I moved in with my sister for six months.

“Palliative care kept calling and eventually they gave me the courage to move home. With their help, guidance and motivation I now live alone here on my own.”

Mr Joyce's palliative care treatment was eventually stopped because he was “getting on very well”, however, he added: “They’re only a phone call away if I want to restart up with them, but at the moment they don’t come up to me. They were my life-saver, they really were.

“Nothing is too much for the palliative care staff. Any problem or situation, they will find a solution. My face is now well disfigured and a lot of people would be embarrassed to go out with it, but palliative care gave me the courage to go out and it doesn’t cost me a thought.

“People ask me how I manage going out with the way my face looks but it really doesn’t bother me in the least.

“I’ve been on a peg-feed for five years and don’t eat much because my swallow is not great. People ask how I do that, but you just do it. Once you’re involved in it, it’s part of your life and part of life is dying, there’s no way around it.

“I’m lucky in the sense that I don’t feel like I’m dying and I don’t mean that flippantly either. I’ve no problem talking about it.”

In 2009 an expert on end-of-life studies, Glasgow University’s Professor David Clark, was tasked with making proposals for the future of palliative care in Ireland.

He came to the conclusion that an institute which could bring together organisations focused on palliative care across the island, in both jurisdictions, should be created.

The All-Ireland Institute of Hospice and Palliative Care (AIIHPC) was subsequently founded in 2010 following Professor Clark’s piece of work. However, the institute’s director, Karen Charnley, referenced the significance of the 1998 Good Friday Agreement.

She told The Detail the peace accord “created the openness to organisations like ourselves being established even though the institute wasn’t set-up directly after the agreement”.

In late 2017, work between the UK Government, the Northern Ireland Civil Service and the European Commission established there were 156 official points of north-south cooperation – of which the AIIHPC was one.

“It is beneficial that we work across and collaborate in both jurisdictions,” Ms Charnley said. “There are always things which people and systems can learn from other jurisdictions by getting ideas from how others are doing things.”

The institute doesn’t itself provide palliative care services. Ms Charnley said: “Our role is to work with partners to develop palliative care by brokering relationships and establishing collaboration across the island of Ireland.”

She also said the AIIHPC does this by engaging with service users, supporting researchers, having official input into policy and hosting events and conferences – including the annual palliative care week which will take place in September.

Professor Joanne Reid, from Queen’s University Belfast’s School of Nursing and Midwifery, has been the chair of the AIIHPC’s Palliative Care Research Network since 2018, though she has worked with the institute since its creation in 2010.

She said the 49-person Palliative Care Research Network “leads research” across the island of Ireland.

Professor Reid told The Detail: “We improve and change practice, north and south, through our research. As part of the research network, we also incorporate the early-career researcher forum which has 150 members from all over Ireland.

“We didn’t have this infrastructure across the island, prior to the AIIHPC. The institute provides a vehicle to enable palliative care researchers in the north and south to come together in a meaningful way.”

The institute participated in a UK and Ireland project in conjunction with Marie Curie which led to the development of the top 10 research priorities for palliative care for the island of Ireland.

Number one on the list was developing research aimed at improving out-of-hours’ care meanwhile the second highest priority was the identification of the best ways to provide care in patients’ homes and ensure that home-care can be maintained for as long as possible.

In addition, the network chair, Professor Reid, said having the AIIHPC has “absolutely been beneficial from a number of different directions”.

She added: “We work with Voices 4 Care which means we’re not just doing research for academic exercise, it’s research that’s important to service users and is going to make a difference to people with life-limiting illness.

“It’s also about knowledge transfer, to make sure research doesn’t just sit on a shelf somewhere, but actually is transferred into practice, policy and education – north and south.

“It also supports links with hospitals and other clinical sites, which is really important, and it keeps us up to date in terms of funding.”

Mayo man, John Joyce, is a part of the AIIHPC’s Voices 4 Care group – made up of palliative care users, carers and former carers.

The group is cross-border and engages with researchers and policy makers, in Northern Ireland and the republic, meaning the group gets a direct input into how palliative care is delivered throughout the island.

Mr Joyce said: “When I then got the chance to get involved in Voices 4 Care, I took it with open arms because I felt I could influence education, research and policy. I’ve been involved in helping to shape all of that.

“Five years ago I was told I’d have about eight months to live and I’m still here. It’s great to have the opportunity to give a little back. It’s also nice for people who are also having palliative care to hear about me still living after all this time.”

Mr Joyce still gets a targeted chemotherapy session every two weeks. He has had well over 100 of these sessions.

He told us: “One of the nurses recently said ‘John, I’m doing an advanced nursing course and you were in one of the videos for it’.

“That made me feel great because it means what we’re doing through the AIIHPC’s Voices 4 Care group is really having an effect. It brought it home to me that it is being used. It’s great to be able to give feedback to people making decisions.”

On the fact Voices 4 Care – as part of the AIIHPC – is all-island, Mr Joyce said: “Dying is dying, it doesn’t matter where you live, it’s universal and Ireland is one island. Ok there’s a border, but we’re one island.

“I have friends from Derry, Newry and other places in the north who I meet through Voices 4 Care. It can only be beneficial for us to work together – the north and the south – by collaborating on stories, on information, on everything.

“When I meet people from the north, I wouldn’t have a clue whether they’re Protestant or Catholic. It makes no odds. They are either carers or they are receiving palliative care.”

Mr Joyce called the AIIHPC “advanced in their thinking” and credited the institute for having “massive foresight”.

“I’ve never been at a meeting or forum connected to the work of the AIIHPC where politics has been mentioned,” Mr Joyce said. “It works so well. It really is a great organisation to be able to distance politics from it.”

Mr Joyce also believes that an all-island approach in healthcare should be adopted more widely in Ireland. “I don’t see why the border should be a barrier to non-political cooperation between the north and the south,” he said.

“Beforehand, we just didn’t have the infrastructure to support all of that,” Professor Reid said. “Through the institute, we now do, in a much more coordinated all-island way.”

Mary Flanagan is the director of nursing for quality and clinical services in Her Lady’s Hospice which delivers palliative care service across three sites; Wicklow, Blackrock and Harold’s Cross.

“We are part of the conglomerate that supports the AIIHPC,” she told The Detail. “The institute provides a system-wide engagement for palliative and hospice care on the island.

“For example, we recently had a presentation from Marie Curie NI, from a service perspective, about responding to the changing needs of the population.

“I sat in on that session, looked at what was going on in another jurisdiction and learned from it. The institute enables that type of learning and sharing as part of a collaborative effort. They are the hub for all of that.”

Ms Flanagan also referenced her visit to a hospice in Northern Ireland a number of years ago where she saw the ECHO project being delivered.

The AIIHPC then became license holders to enable ECHO to operate in the south. Ms Flanagan said: “Some of those workshops had about 500 people at them, all of which were facilitated through the AIIHPC.

“We are small in size and scale in terms of the number of hospices in Ireland so those networking opportunities which provide a forum for people to share experience and problem solve together are invaluable.

“Service providers look at the best of palliative care in the south, the best of the north and then apply it to their own local region. It’s just the most sensible way to do things.”

Originally funded by Atlantic Philanthropies, the AIIHPC has more recently been funded by statutory organisations like the Public Health Agency in Northern Ireland and the Health Service Executive in the Republic of Ireland.

The institute director, Ms Charnley, said: “The original idea for the AIIHPC was that it would be a time-limited organisation for five years so that we’d cease in 2015, but then we did a lot of consultations and there was a decision made that there was still a role for the organisation.

“We don’t want to grow for the sake of growing, but we have a vision for the role of the institute and feel there is a clear and meaningful role for it to play.”