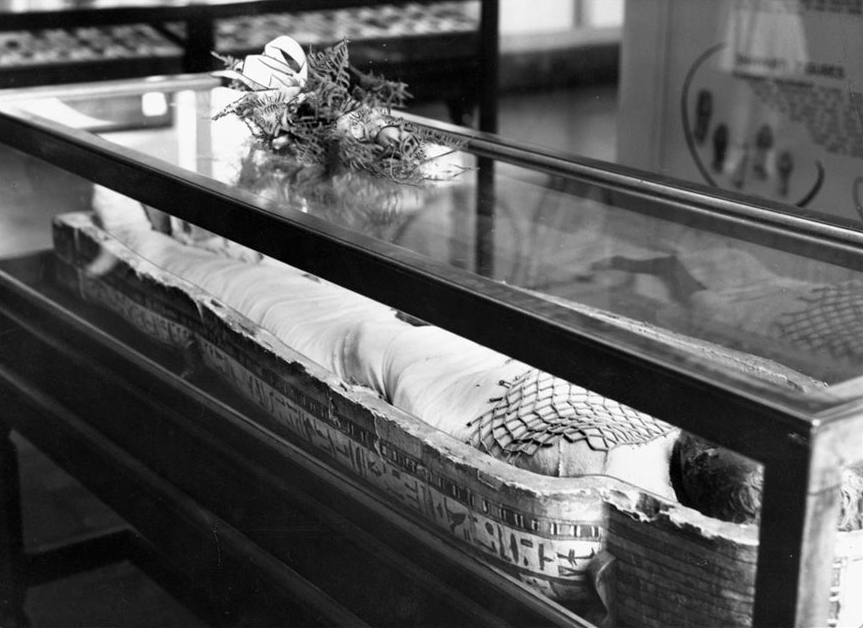 National Museums NI's photo of the Takabuti mummy in its possession..

NATIONAL MUSEUMS NI has confirmed that signage and publicity materials relating to its famous Egyptian mummy Takabuti do not mention that it was purchased and donated by a Co. Down slave plantation owner.

Takabuti, on permanent display at the Ulster Museum, was brought to Belfast in 1834 after being purchased at an antiquities market in Thebes, Egypt, by Thomas Greg of Ballymenoch House, Co. Down.

Takabuti was a married woman, aged between twenty and thirty years, who lived in Thebes at the end of the Twenty-fifth Dynasty of Egypt, which lasted from 747 BC to 646 BC.

Thomas Greg, who lived in Holywood, Co. Down, came from a family of merchants, industrialists, and slave owners. He was the inheritor of two slave plantations in the West Indies, Cane Garden in St. Vincent and Hillsborough in Dominica.

In 1835, following the 1834 commencement of Britain’s Slavery Abolition Act, Thomas Greg was given separate sums of just over £2,830 and £2,250 in compensation for 128 slaves freed from Hillsborough, and 82 slaves freed from Cane Garden, respectively.

No compensation was paid to the slaves.

National Museums NI said it has made “commitments” to decolonisation and noted the importance of “understanding acquisition histories” of its artefacts.

However, a spokesperson has confirmed that its prized mummy, featured in a display focusing on life and death in Ancient Egypt, makes no mention of the slave plantations owned by Takabuti’s donor, Thomas Greg.

The Detail has partnered with Belfastmedia.com to produce a series of articles examining historical connections between some of our local institutions and slavery, and colonialism.

We previously reported how National Museums NI said it has no plans to repatriate some 4,500 objects taken from overseas. We also reported on an appeal being made for the return of two human skulls, from Hawaii, which are currently held by National Museums NI.

Takabuti was donated by Thomas Greg to the Belfast Natural History and Philosophical Society, whose collections were acquired by the Belfast Art Gallery and Museum in 1910.

The Greg family’s involvement in the slave trade spanned several generations and can be traced back to Thomas Greg’s great-uncle, John Greg, and his grandfather, also named Thomas Greg (d. 1796). The latter was the joint owner, alongside his partner Waddell Cunningham, of the eponymously named Belfast slave plantation in Dominica, which held 60 slaves at its 1817 inception and 112 enslaved people at its height in 1832.

John Greg – brother of Thomas Greg (d. 1796) – owned the Hertford slave plantation in Dominica and was joint owner of the Hillsborough (Dominica) and Cane Garden (St. Vincent) plantations. The plantations were inherited by Thomas Greg in 1834 – the year he purchased Takabuti.

“If you are going to publicise it and show it in public then the least you can do the honest story of how these things came about,” he stated.

“They should offer the remains to the people of the country they came from.

"These remains belong to people. They are family members of other people. The least the museum can do is acknowledge that and offer them to be returned.”

He added: “To take the remains of someone and to display them – that’s not civilised.”

A spokesperson for National Museums NI said it was “not unusual for museums to hold other objects donated by slave owners”.

National Museums NI said its current approach is “to highlight slavery and its legacies through visible means”. However, despite being asked, National Museums NI did not provide us with a comprehensive list of its objects that were first obtained by slaveowners.

The spokesperson said the agency is “committed to expanding the narrative about slavery” across all its sites.