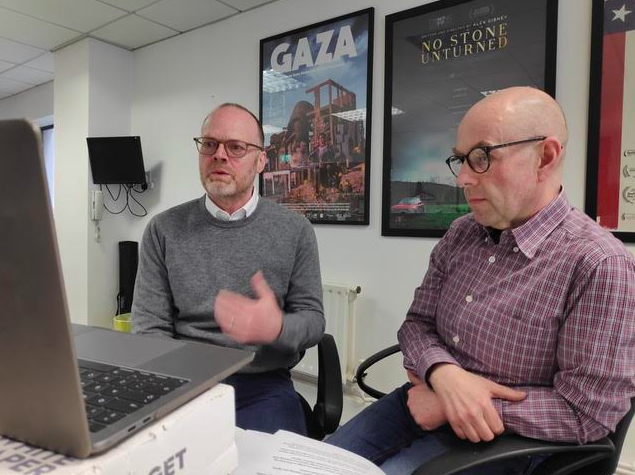 THE Chief Constable of the Police Service of Northern Ireland (PSNI), Simon Byrne, has held a “constructive” Zoom meeting with Loughinisland journalists, Trevor Birney and Barry McCaffrey, during which he repeated his apology for their arrests.

Mr Birney and Mr McCaffrey were arrested in August, 2018 following the release of the film, No Stone Unturned, which revealed state collusion in the 1994 UVF massacre at The Heights Bar in Loughinisland, County Down in which six men died.

The film had used a document, leaked to Mr McCaffrey, to reveal the names of the chief suspects who had never faced justice for their roles in the attack.

Mr McCaffrey and Mr Birney worked with Oscar-winning director, Alex Gibney, to tell the story of how police had failed the victims over two decades.

The then Chief Constable, Sir George Hamilton, launched an investigation into the leaked document.

Police went to the courts in an ex-parte application to seek warrants for searches of the journalists' homes and offices. The warrants were retrospectively quashed after the journalists launched a judicial review.

The PSNI later agreed in December last year to pay the journalists over £850,000 in damages.

Recognising their arrests had occurred prior to his appointment, the journalists credited Simon Byrne for dealing with the fall-out from the judicial review.

“Even if journalists are pursuing stories that police could view as uncomfortable, they should be respected for their vital role in a democratic society,” Mr Birney said.

He added that the criminal investigation launched by the PSNI had shown a “disrespect for us personally and for journalism generally” and that it was “an attack on freedom of the press”.

In their meeting, the journalists also raised recent death threats against fellow reporters Patricia Devlin, Allison Morris and others.

Calling the meeting “constructive”, a PSNI spokesperson added: “The Chief Constable reiterated his unreserved apology for the distress and upset caused to both men and their families as a result of their arrest.”

The journalists sought reassurance from Chief Constable Byrne that the PSNI would never again resort to using secret ex-parte hearings as a weapon against journalists.

Mr Birney said: “We hope that police never again launch a malicious investigation into journalists in order to find their sources, but unlike in our case, the PSNI should follow the proper legal path of production orders, which provides journalists and news organisations the right to defend themselves in front of a judge.

"In our case, the PSNI clearly misled the judge in the ex-parte hearing.”

Following the meeting, Mr McCaffrey said: “The PSNI deliberately chose not to go for a production order. They chose to arrest journalists for simply exposing the truth.

"That was a disastrous and unforgivable decision which caused untold hurt and pain to the victims' families.

“Unfortunately neither Mr Hamilton or the Acting Deputy Chief Constable at the time, Stephen Martin, have ever publicly been held to account for their actions.”

Mr McCaffrey also said that lessons had to be learned, adding: “Attacking the media and threatening press freedom is not good policing.”

Mr Birney said the case had damaged relationships and sent a “clear and very worrying message to both journalists and victims” that to pursue truth in legacy cases could cause the state to “react with the aggression which we were the focus of in August 2018”.

He added: “No Stone Unturned was a journalistic investigation into the murder of six innocent men. Our arrests only caused further pain to the Loughinisland families.”

Last month, The Detail reported that the PSNI had launched an investigation after it handed over blank tapes which should have contained the police interviews of Mr Birney and Mr McCaffrey.

However, the PSNI recently declined to provide us with an update on the status of its internal investigation into this matter.

The Detail can also confirm that Durham Constabulary, which worked with the PSNI to investigate Mr Birney and Mr McCaffrey, is no longer investigating the leaking of the document.

Amnesty International and the National Union of Journalists have called on the Northern Ireland Policing Board to investigate the full circumstances behind the arrests of the journalists.