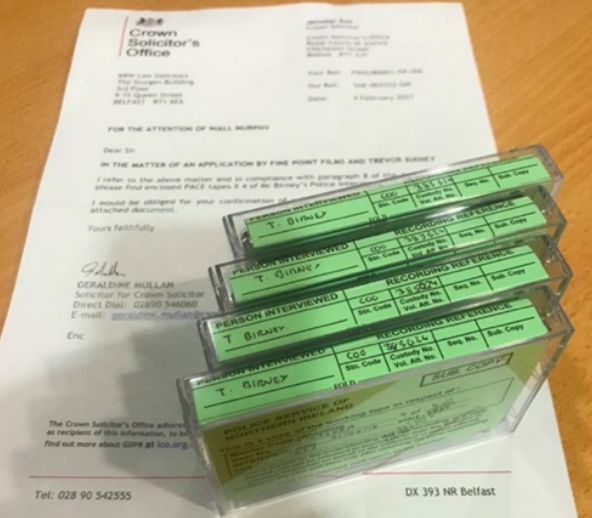 Photo of the blank tapes which were initially sent to Trevor Birney.

THE Police Service of Northern Ireland (PSNI) has launched an investigation after it handed over blank interview tapes to the two arrested Loughinisland journalists, Trevor Birney and Barry McCaffrey.

Last year, police had agreed in the High Court to provide the recordings of officers, from the PSNI and Durham Constabulary, interviewing the two reporters at Musgrave Street Police Station terrorist suite in August 2018.

However, last week, the men’s respective legal representatives both received tapes which were blank, apart from opening introductions made by the detectives who were in charge of the interviews.

Mr Birney’s solicitor, Niall Murphy, told The Detail that the disclosure of the tape recordings of these police interviews was an "explicit term of the settlement agreement", signed last November, following his client’s successful judicial review of the PSNI’s decision to arrest him and his colleague, Mr McCaffrey, and to raid their homes and office.

On Thursday, the PSNI told The Detail it arranged for full recordings of Mr Birney’s interviews to be made available “immediately after” the service became aware that tapes “did not contain the full recordings”.

However, a week earlier – the day when the first batch of tapes were received – Mr Murphy reviewed them and found all four were blank.

That day, he informed the Crown Solicitor’s Office (CSO) which handled the PSNI and Durham Constabulary legal response to the judicial review, that the sending of the interview recordings was part of a High Court agreement.

“It is a source of great distress for my client that a constituent part of the agreement has not been honoured by your clients. I look forward to hearing from you as a matter of urgency,” Mr Murphy later wrote.

Despite being asked, the PSNI did not inform The Detail who was responsible for the handling and original release of the tapes sent to Mr Birney.

However, the PSNI said: “The reason why material did not transfer onto the tapes provided and why this was not identified in advance, are being investigated.

“The provision of tapes without recorded content was an error and certainly not intentional.”

Mr Birney welcomed the PSNI saying it would investigate the matter, but queried how the police could make a “pre-determination that this was not intentional” prior to the outcome of the investigation being reached.

Despite what the police have said, Mr Birney feels it’s likely that “someone within the PSNI went out of their way to erase the recordings”.

Mr Birney added: “After all we’ve been through, how can we not but think that someone within the PSNI was at their work. These tapes just didn’t erase themselves.

“There is very damning material on those tapes and the initial decision to release them blank only raises further questions about the senior management within the PSNI and their attitude towards the courts and, indeed, their commitments to truth and transparency.

“Once again, the PSNI is launching another investigation in relation to Loughinisland. When are they going to get around to investigating the actual massacre of six innocent men?”

He told us he had written to the PSNI "demanding a full explanation" of what has transpired.

Mr McCaffrey called the matter of “deep concern” and said that “you have to ask why this was done and what they are trying to hide”.

The PSNI told us the service was "making enquiries into the full circumstances of what has occurred" in his case, but added that "any error was certainly not intentional".

Trevor Birney and Barry McCaffrey were arrested following the release of the film, No Stone Unturned, which revealed state collusion in the 1994 UVF massacre at The Heights Bar in Loughinisland, County Down in which six men died.

Last December, both men and the company, Fine Point Films, were awarded over £800,000 in damages after bringing a judicial review to the High Court in Belfast.

Following the ruling, the Chief Constable of the PSNI, Simon Byrne, apologised to the two journalists.

Through use of a document, leaked to Mr McCaffrey, he and Mr Birney had worked with Oscar-winning director, Alex Gibney, to tell the story of how police had failed the victims over two decades.

In 2016, the then Police Ombudsman, Dr Michael Maguire, said: “I have no hesitation in saying collusion was a significant feature of the Loughinisland murders.”

Following their arrests, the two journalists were taken to Musgrave Street Police Station and were held in the terrorist suite.

They were questioned over a period of 14 hours about the leaked document.

These interviews, as is normal procedure, were recorded by police. Tape recordings are normally disclosed to a defendant’s legal team if legal proceedings follow.