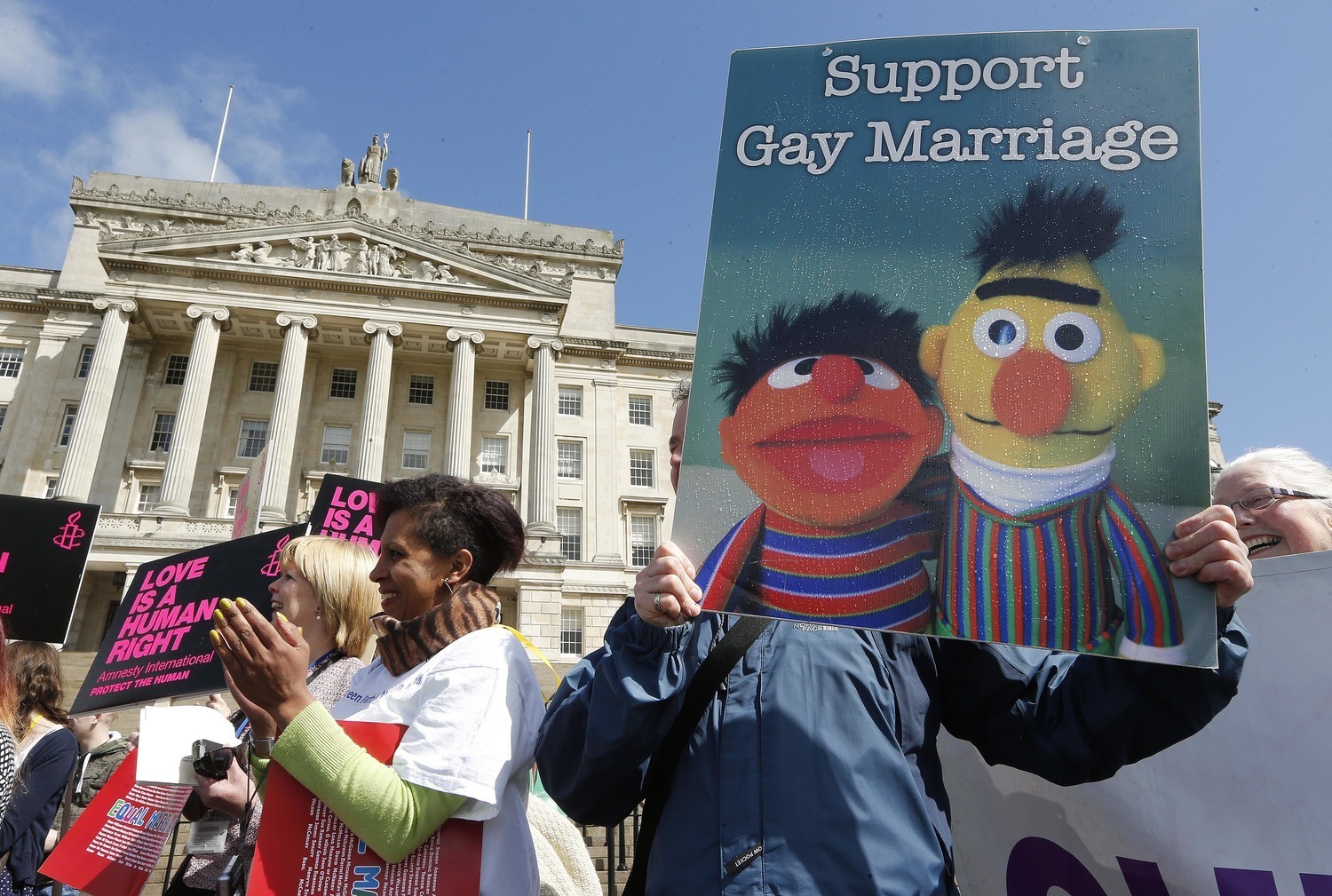 THE historic vote to embrace marriage equality in the Irish Republic coincided with the anniversary of the Good Friday Agreement referendum.

The campaign that urged voters to support the Good Friday peace deal carried a sense of optimism during what was a tense time.

In an iconic campaign image, U2's Bono enthusiastically held aloft the arms of David Trimble and John Hume, even though the middle-aged leaders of unionism and nationalism looked a little bewildered.

Today it's the south's turn to set a positive new tone for the future, while the north is accused of living in the past.

After the Republic voted in favour of marriage equality, with 62% voting Yes, Northern Ireland is now out of kilter with the rest of the UK and the rest of Ireland.

It is the only jurisdiction on these islands where same-sex marriage is off the agenda.

But the picture is not clear cut.

There isn’t a uniform 'No' emanating from the power-sharing Assembly in Belfast.

A recent Sinn Féin motion in support of same-sex marriage was derailed by the DUP, but it drew the support of some members of both the SDLP and the Alliance Party, plus three independent unionists, the Green Party's MLA and a member of the Ulster Unionist Party.

The range of voices illustrated that there are diverse views at Stormont. It also pointed to the fact that there are Christians on both sides of the debate over equality for the gay community.

There was outrage from some Christian groups after the bakery was found to have discriminated in the so called 'gay cake' controversy.

But the heat may be fading out of the issue.

Chief Commissioner of the Equality Commission Michael Wardlow, writing here in The Detail, said that despite the reaction from some quarters, the court ruling did not set a new precedent and did not put businesses under any new pressure.

Mr Wardlow wrote that business owners "who hold moral or religious beliefs often take decisions which self-limit the scope of that business", adding that "some businesses operate with policies [declining] the promotion of any political cause".

Ashers has now announced it will limit its specialist product range to birthday and children's cakes pending further discussions with its lawyers.

The Equality Commission is set to issue fresh guidance for businesses to provide clarification following the furore.

The reaffirmation of the existing equality law, and the promise of new guidance, could undermine controversial DUP calls for a Conscience Clause to allow an 'opt out' where religious belief clashes with legal protections for the gay community.

But even if some of the tension were to be taken out of the divisive debates, gay couples in Northern Ireland will still be denied the marriage rights that would be afforded to them in Britain or in the Republic.

While crunch-time on that inconsistency awaits Stormont further down the track, the Assembly is facing a more pressing problem.

Not only is Stormont on the wrong side of history over same-sex marriage, it is also presiding over delays in the delivery of two much more basic equality measures.

The Detail’s infographic project, Imaging NI, recently reported on the growing diversity in Northern Ireland society and the difficulties faced by some communities.

Hate crime has fuelled calls for political action from the Assembly.

But for nearly a decade there have been delays in delivering a Sexual Orientation Strategy for Northern Ireland (first promised in 2006) and a Racial Equality Strategy (promised since 2007).

The two packages should be the key government tools to combat discrimination and promote the rights of such communities.

In March 2014 ministers announced a 12-week process to begin devising a strategy on sexual orientation.

In June 2014 a public consultation on a draft Racial Equality Strategy was launched and was due to end last October.

But now further delays have set in.

When The Detail asked OFMDFM to account for the continuing failure to introduce the strategies, a spokesperson said that work on the measures was ongoing.

In its response, available here in full, OFMDFM promised a racial strategy aimed at "eradicating racial inequality", plus a sexual orientation strategy that "will address the issues that impact on the daily lives of lesbian, gay and bisexual people".

But the Equality Commission expressed concerns at the delays.

The equality watchdog told the Detail: "The Commission continues to raise concerns about the Northern Ireland Executive's delay in progressing both the sexual orientation and the racial equality strategies.

"The Equality Commission would like to see the results of the public consultations carried out by OFMDFM in relation to the racial and sexual orientation strategies."

The commission added: "It is vital that progress can be made and robust strategies implemented which will address race and sexual orientation discrimination and hate crime.”

It seems Stormont is playing 'catch-up' on a number of fronts.